You are here: Home › The ‘Warlord’ That Has “Taken Over” Part Of Seattle Is A Complete Scam 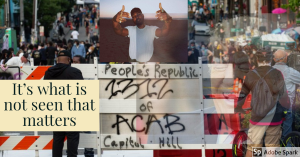 When one thinks of “warlords”, one things often of something out of the Middle East or Africa. But as Zero Hedge reports by way of Komo News, there is now a rapper, Raz Simone, declaring himself “warlord” over part of Seattle and to which local politicians are promising to give him more power.

A Seattle Councilwoman says the six-block, warlord-controlled ‘Capitol Hill Autonomous Zone’ (CHAZ) should permanently remain in the hands of the public, according to Komo News.

Councilwoman Kshama Sawant, who embedded herself in the front lines of Seattle’s BLM protests over George Floyd’s death – a black man who died after a Minneapolis cop knelt on his neck for nearly nine minutes – says she plans to introduce legislation which would officially convert the neighborhood into a ‘community center for restorative justice.

On Tuesday evening, Sawant opened the doors to City Hall, allowing over a thousand protesters inside who loudly demanded that Seattle defund the police department and ban the use of chemicals such as tear gas. The protesters also called for the immediate resignation of Mayor Jenny Durkan.

The Seattle PD are currently working to broker a deal with protesters, who have controlled CHAZ since Tuesday after clashing with police over the weekend – resulting in the evacuation of a police precinct and a National Guard pullout.

In less than a week, Seattle Police Chief Carmen Best says crime has already spiked 300%, and that “Rapes, robberies and all sorts of violent acts have been occurring in the area and we’re not able to get to [them].”

Meanwhile, homeless people ended up stealing the food brought in to support the hungry protesters, and “heavily armed” soundcloud rapper (and AirBnB superhost) Raz Simone has taken over as the autonomous zone’s resident warlord with his crew. (source)

Honestly, take a look at this man.

Does anybody believe this person is an actual “warlord”, much less “took over” part of a major American city?

As one goes about pondering this, remember three cases in recent memory- Waco, Ruby Ridge, and the standoff with Cliven Bundy that almost turned into a massacre but did not.

In the latter two, these are a few individuals with small arms who took up a position against the government. The only reason that Bundy did not end up with the same fate as Jack Ruby’s family was because international media was watching the Bundy incident and broadcasting it before the world, and the only reason that Bundy was not thrown in jail for life was because of a technicality in the court procedures that let him get off free. However, the entire incident dragged on for years through the legal system.

The Waco incident was a complete massacre. Eighty-two people were murdered in the fire-and-shootout, most of them by FBI agents, and the survivors were sentenced to decades in prison. This was in 1993.

The US government has a history of viciously cracking down on anybody who attempts to “rebel” against Washington. Regardless of one’s feelings on the Confederacy, one only needs to look at the Civil War, for the Confederacy exercising her legal right to secede resulted in the worst war yet in American history with approximately 620,000 people dead and the American south put into a permanent state of occupation, first by the “Reconstruction” that lasted almost two decades, and then by the proliferation of miltiary bases by theg government that has continued to this day. This is not because of “patriotism”, and while many people in the south enlist most heavily in the military, it is because of the government forcing the issue as a way of quelling potential rebellions.

So one must ask oneself why on Earth some two-cent rapper who dresses like a fool and ostensibly has no serious education- remembering that many African dictators, including extremely brutal ones, are very well-dresses, well-presented, and highly educated people -is able to run around like a headless chicken declaring himself “warlord” in a major American city while people and nothing is done about it while people who actually fight in an organized way and show serious potential are violently attacked.

The only way to explain this dichotomy is that one is looking at a strategy of tension.

Consider this “warlord” as but an actor” in a game of geopolitics. He has no power. He is only being given power and allowed to run around just like the rioters are being allowed to run around burning random businesses because it serves the ends of the government. If he was a real threat to the government, there is no doubt that he would be viciously snuffed out before he had the chance to make even his first statement.

The government is playing race-off-of-race in what seems to be an attempt to start a race war. It is sick and evil, but there is no other way to explain the strange behavior, especially in an election year, outside of this.

This man is a “warlord” as much as Osama bin Laden was part of the Taliban- a CIA funded and organized group -as an enemy of America. This is a grand strategy of tension and the same kind of “Gladio” that the US has been doing on countries around the world but is now being done to the American people. She is attacking herself so as to justify “remaking” herself into a new order and putting peoples against each other so that the division can be used to strip rights and destroy what is left of the “old” America in preparation for a new age of eugenics in the name of ‘social order’ and making society a better place.

Likewise, remember what Ted and I have warned about on Shoebat.com, that because of the racial tensions in the Pacific Northwest, it is similar to the political situation in Bohemia and Moravia, and we warned that just like in Europe, what Germany does in those regions of Europe could be what Washington and Oregon are for the US.

The best way to fight this is the same as before. Disown any racism or racial hatred. Refuse to take a side with either group, because while people say that “silence is consent”, it is not always such, for sometimes to win at a fight such as this the only way that one can be victorious is not to play in the first place. Stick to the course, which is to love all men and seek their good will while not hurting oneself, and to do what is right always regardless of what the cost may be.