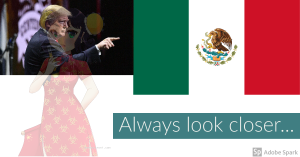 Ted, Walid, and I have noted that US migration policy is not “solved” because it is a political football used by the government and both parties for their ends, specifically to advance certain social and economic objectives, without any regard to the good will of those either in the US or Mexico. The problem is not so much of ‘illegal immigration’, but about the politicization of the issue and the abuse of people in the name of power which has persisted for decades without end.

On May 26th, 2020, I put up a piece about how Mexican people were putting up checkpoints and border guards to slow the flow of Americans going to Mexico and to check for the spread of COVID-19 by American travelers. Now in a very ironic twist on and follow up to this story, the White House is now blaming Mexico for spreading COVID-19 to Americans.

The White House is floating a theory that travel from Mexico may be contributing to a new wave of coronavirus infections, rather than states’ efforts to reopen their economies.

The notion was discussed at some length during a meeting of the administration’s coronavirus task force in the White House Situation Room Thursday that focused, in part, on identifying commonalities between new outbreaks, according to two administration officials familiar with the discussions.

The U.S. and Mexico entered into a joint agreement in March to restrict non-essential travel along the countries’ border to try to contain the spread of the coronavirus, though American citizens and many others are still allowed entry to the U.S., including those conducting commercial traffic and agricultural workers.

Still, cross-border travel is down substantially, and the U.S. State Department continues to urge Americans to avoid all international travel due to the pandemic.

Trump has long tried to used Mexico as a scapegoat, painting the country as a source of crime and disease in the U.S. And he has used the pandemic crisis to push forward some of his most hard-line stalled immigration proposals, including blocking asylum cases and placing new limits on green cards. (source)

Now it is important to make sure before drawing any conclusions to have as many details as possible about the current situation. However, from what it appears to be initially, it looks as though Mexico has been on top of her end, at least in some capacity, for attempting to ensure that COVID-19 is kept under control.

It is known that the Trump administration uses racial animosity to divide people for policy reasons, and appears to thus far have been the most effective administration in American history yet at doing this. However, given the current conditions, one does not (and should not ever have began in the first place at all) need more of this.

The animosity needs to stop. Mexico is the the cause of COVID-19 spreading. The only virus more dangerous right now that COVID-19 is the virus of racialism, which is poisoning all people against each other and only making society sicker than it already is.

Scientists Declare That The Second Wave Of COVID-19 Has Not Hit Yet
Anti-Police Gangs Are Setting Atlanta On Fire Over The Death Of Rayshard Brooks, As The United States Is Becoming A Country Of Mob Violence
Follow