You are here: Home › Supreme Court Declares That Federal Law Protects LGBT From Discrimination At Work 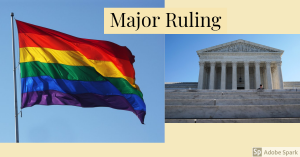 In an arguably landmark ruling that will have considerable long-term consequences for trends in all areas of life, the Supreme Court has declared that Federal Law protects people who identify as LGBT from discrimination at work as the New York Times reports.

The case concerned Title VII of the Civil Rights Act of 1964, which bars employment discrimination based on race, religion, national origin and sex. The question for the justices was whether that last prohibition — discrimination “because of sex”— applies to many millions of gay and transgender workers.

The decision, covering two cases, was the court’s first on L.G.B.T. rights since the retirement in 2018 of Justice Anthony M. Kennedy, who wrote the majority opinions in all four of the court’s major gay rights decisions.

Those decisions were grounded in constitutional law. The new cases, by contrast, concerned statutory interpretation.

Lawyers for employers and the Trump administration argued that the common understanding of sex discrimination in 1964 was bias against women or men and did not encompass discrimination based on sexual orientation and gender identity. If Congress wanted to protect gay and transgender workers, they said, it could pass a new law.

Lawyers for the workers responded that discrimination against employees based on sexual orientation or transgender status must as a matter of logic take account of sex.

The court considered two sets of cases. The first concerned a pair of lawsuits from gay men who said they were fired because of their sexual orientation. The second was about a suit from a transgender woman, Aimee Stephens, who said her employer fired her when she announced that she would embrace her gender identity at work. (source)

It will be very interesting, in consideration of the many lawsuits involving LGBT cases and religious institutions, how this will affect the state and practice of religion in the US.

Not The Democrats: Trump’s Own Family Turns Against Him
24-Hour-Fitness Declares Bankruptcy Due To Effects Of COVID-19
Follow