You are here: Home › COVID-19 Cases Massively Increase All Across The South 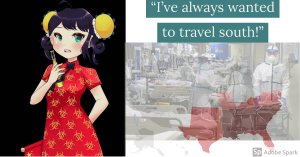 It is not a problem.

You are making this up.

Everything is going to be fine.

Just go on with your life and stop worrying.

The disease is going to go away and nobody is sick.

According to a recent story from ThompsonReuters, COVID-19 cases are, not surprisingly as we have been warning with near constant discussion at Shoebat.com, exploding all across southern states that have ‘reopened’.

New cases of COVID-19 nearly doubled in Alabama and South Carolina in the second week of June compared to the prior seven days, a Reuters analysis found, as 17 U.S. states reported weekly increases in the spread of the novel coronavirus.

Alabama’s new cases rose 97% to 5,115 for the week ended June 14, with 14% of COVID-19 tests coming back positive compared to 6% in the prior week, according to the analysis of data from The COVID Tracking Project, a volunteer-run effort to track the outbreak.

New cases in South Carolina rose 86% to 4,509, while the positive test rate rose to about 14% from 9% over the same period, according to the analysis and state data.

When asked to comment on the increases, South Carolina and Alabama health officials said some residents were not following recommendations to maintain social distance, avoid large gatherings and wear a mask in public.

In Oklahoma, where President Donald Trump plans to hold an indoor campaign rally on Saturday, new cases rose 68% to 1,081 in the second week of June, while the positive test rate increased to 4%, from 2% the previous week.

Oklahoma officials did not immediately respond to requests for comment.

The three states are among hot spots throughout the South and Southwest that helped push the total number of new infections in the United States up 1% in the week ended June 14, the second increase after five weeks of declines, Reuters found.

(Open https://tmsnrt.rs/2WTOZDR in an external browser for a Reuters interactive)

The state that reported the largest number of new cases was California at 20,043, up 10% from the previous week.

Nationally, the rate of positive tests has hovered around 5% for several weeks, according to the analysis. More than 583,000 tests were reported in a single day last week, a new record. (source)

Please be safe out there. One may be frustrated and want to do things, but there is still a pandemic, and diseases do not make exemptions for political activity regardless of the matter.

NYPD Denies That Fast-Food Employees May Have Attempted To Poison Police Officers’ Food
Left Wing Fanatics Start Taking Down Statue. They Attack A Man Who Tried To Defend The Statue. The Man Takes Out His Pistol And Shoots One Of The Fanatics
Follow