You are here: Home › Left Wing Fanatics Start Taking Down Statue. They Attack A Man Who Tried To Defend The Statue. The Man Takes Out His Pistol And Shoots One Of The Fanatics 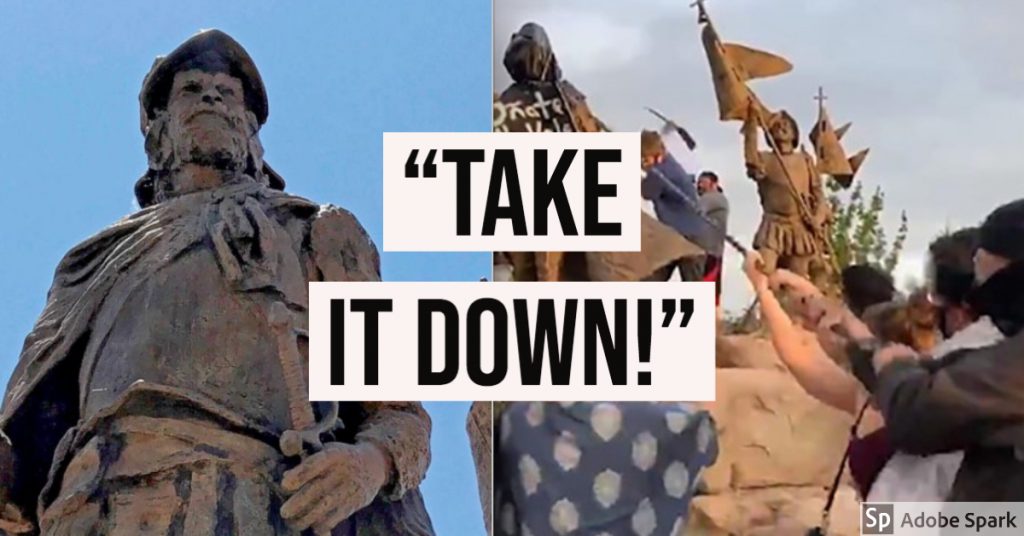 There is a frenzy for removing statues, an iconoclasm that reflects an hysterical outrage while and provoking a dangerous rage. The Left, in their war against authority and in their fantasy to replace the State with their own utopian vision, has been removing the states; the Right, on the other hand, has been lodging their angry reaction against this war on historical monuments. The situation could escalate into a ripple of factional violence in the Western world.

In Albuquerque, New Mexico, a protestor was shot as he and his fellow iconoclasts were trying to pull down a statue of the Spanish Conquistafor, Juan de Onate. A group of around 300 protestors assembled to call for the tearing down of the Onate statue. An armed group of men — part of the New Mexico Civil Guard, were also present to remonstrance against the removal of, and to protect, the statue. In the hours before the gunshots, there was a tense confrontation between protestors and the militiamen. Protesters wrapped a chain around the monument and commenced to tear it down, while chanting: “Tear it down.” One protester hacked at the base of the state with an axe. One militiaman, dressed in a blue shirt, got into a tense exchange of words with the protestors. His name was Stephen Ray Baca. Baca was eventually struck by a skateboard. Baca tried leaving and one protestor encouraged others to follow him. He was tackled down by another protestor. As he tried to get back up three protestors attacked him. He then pulled out a gun and opened fire, injuring one man.The militia that was present to protect the statue, the New Mexico Civil Guard, affirmed that Baca was not affiliated with them. In fact, as the Washington Times reported, the Civil Guard took control of Baca after shooting:

“In a second video that captured the moments following the shooting, the gunman sat in the middle of a road as the New Mexico Civil Guard militia members formed a circle around him. One man carrying a semiautomatic rifle, camouflage fatigues and a military-style helmet kicked the handgun away from the man and stood with his foot on top of the weapon.”

Albuquerque police, according to the Guardian, reported that they “received reports of vigilante groups instigating violence”. New Mexico governor, Michelle Lujan Grisham, also made mention of militants and instigators:

“There is absolutely no space in New Mexico for any violent would-be ‘militia’ seeking to terrorize New Mexicans; and there is no space for violence of any kind on our streets and in our communities or for any sort of escalation of reckless, violent rhetoric, no matter who strikes first. The instigators this evening will be rooted out, they will be investigated, and they will be held accountable to the fullest extent of the law.”

If the the Left really cared about fighting racism, they would reject Margaret Sanger and Charles Darwin. But they don’t because they are hypocrites. If its not about racism, then what is the ultimate motive behind this? I suspect that this is a form of instigation, a strategy of tension by which to get some sort of violent reaction from the Right. Do not fall into the trap.

I have heard people say, ‘If the Left keeps telling me I’m racist, I will eventually act racist.’ This is exactly the end goal of the strategy of tension: to spark racism and nationalism. Do not fall into the trap. Reject all racism, fight all evil, stand up for what is good and holy.