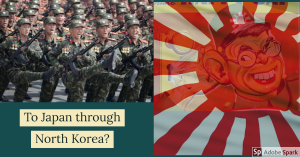 North Korea has been sometimes referred to as “best Korea”, albeit this is rather comical considering that North Korea is an impoverished backwater and buffer zone used by the Chinese, Russians, Japanese, and Americans for their own geopolitical leverage. The small northeast asian nation has techincally been at continual war with South Korea since the 1950s and it has never ended, as there was never a peace treaty signed, but merely a negotiated armistice that has acted as a peace with period of war.

However, in an interesting move, South Korean news agency Yonhap reports that North Korea may be preparing to send troops into a demilitarized region, thus making it an act of war and in a technical sense, an attempt at invading South Korea.

orth Korea’s military said Tuesday it is reviewing plans to reenter a border zone that was previously disarmed under an inter-Korean agreement.

“Our army is keeping a close watch on the current situation in which the north-south relations are turning worse and worse, and getting itself fully ready for providing a sure military guarantee to any external measures to be taken by the Party and government,” the General Staff of the Korean People’s Army said in a statement carried by the Korean Central News Agency.

The KPA is studying “an action plan for taking measures to make the army advance again into the zones that had been demilitarized under the north-south agreement, turn the front line into a fortress and further heighten the military vigilance against the south,” it said.

“We will map out the military action plans for rapidly carrying out the said opinions to receive approval from the Party Central Military Commission,” it added. (source)

South Korea has issued very stern responses, including that they will be prepared to engage in military action if necessary.

“The government expresses strong regret over North Korea’s unilateral explosion of the inter-Korean liaison office building,” Kim You-geun, deputy director of Cheong Wa Dae’s national security office, told reporters after the meeting. “We sternly warn that we will strongly respond to it if North Korea takes any action that further worsens the situation.” (source)

Wht will be interesting to see in the response of Japan, for Trump’s actions have already loosened the way for Japan to return to a militaristic state. If North Korea attempts to engage in mischief, the threat would not be the poorly-fed, impoverished, and poorly equipped North Korean military, which poses more of a threat to the local buffet than to a country, but Japan using the crisis as an opportunity to advance her own attempts at remilitarization saying that because of the “threat”, she needs to build more weapons and increase her military’s strength.

As with many things, the threat is not such as it necessarily appears, for North Korea is but a puppet with her neighbors hide behind to shield their true intentions. The real threat comes from the east, as as the Empire of Japan in the “land of the rising sun”, so they want that a new day would dawn upon their imperial aspirations and will look for any excuse to see that such conditions for its return will be realized.