You are here: Home › Former Soviet President Gorbachev Denies Existence Of Past Plans To Sell The Region Of Karelia To Finland 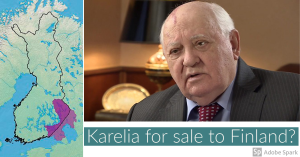 One of the problems that I have noted which Russia faces is that she is collapsing from within and does not really know how to restore order because the problems are systematic and there is no effective way to remedy them at the time. She may be the largest nation in the world, but her population in 142 million and dropping per year at a rate of 1 million persons. She is the largest nation in the world, but both Germany and France not only have stronger GDPs, but have more people combined than all of Russia, and yet the two nations are (according to the CIA Factbook) equivalent in size to the state of Texas and Montana respectively. She is wracked with internal problems, the largest of which is her growing in ability to keep her many and diverse peoples unified.

While many may think of Russia as “Slavic”, this is only so for about 75%-80% of the nation maximum. The rest is a combination of primarily Asiatic, Turkic, and Indo-Aryan peoples who speak many different languages, practice religions from Islam to Buddhism to Shamanism, and who often have largely autonomous rule throughout much of Russia. The danger of this to Russia is that while she has been able to unite them, these same peoples also have a long history of rebellion but ruling Russia, and since many of them tend to do financially well (the wealthiest area overall in Russia as far as the balance of wealth and the existence of a middle class as opposed to the African-tier wealth/poverty divide which defines most of Russia is the Muslim region of Tatarstan), the division is so severe that they could potentially break away from Russia in the future and fragment the Russian Empire into a series of independent states and possibly leave Russia isolated as a nation west of the Urals. This is not an unrealistic proposition, and it has been noted many times, by the CIA.

After the Second World War, the USSR annexed the historical German exclave of Königsberg and renamed it Kaliningrad. However, in 2001, the UK Telegraph reported that following the fall of the Soviet Union, Russia made moves to attempt to sell Kaliningrad back to Germany, which she refused to accept.

Noting this history, it is of interest that according to a recent interview with former Russian President Mikhail Gorbachev published by Komsomolskaya Pravda, he explicitly denied the existence of plans to return Karelia, a historical Finnish territory annexed by the USSR during World War II, to Finland.

when Mikhail Gorbachev was president of the USSR, the question of transferring (or even selling) Karelia to Finland was allegedly being decided . By the way, one of the famous Russian politicians allowed this option …

Data on the failed transaction is given in the book of the diplomat, former expert of the Finnish Foreign Ministry, Jukka Seppinen. He claims that in 1989-90, Gorbachev was ready to discuss the transfer of Karelia . It was allegedly about 15 billion dollars. At the same time, according to Seppinen, the ambassador of the USSR Lev Pausin participated in the discussion of the transaction . The foreign diplomat writes that the Soviet authorities wanted to “get rid of Vyborg, ” because they were not able to restore it. (source)

There are only two possibilities- either these plans existed or they did not, and if so, either he supported them or he did not. Nobody knows the exact truth about this. Given Putin’s current attempt at making himself into a new combination Tsar-and-Stalin and modeling his rule after that of the USSR, it is possible that such allegations may be a sort of attempt at a political hit on Gorbachev, especially considering the current discoveries of mass graves of people murdered by the NKVD in Soviet times, and the fact that Karelia is also home to Vyborg, which is the main port Russia wants to use as part of the Nord Stream II pipeline to Greifswald, Germany that Shoebat.com has written about in her archives.

But speculation aside, the fact is that Russia is in a lot of trouble. She has many ethnic regions that have histories of rebellion against her, and while Russia is considered to be the second strongest military in the world, she cannot maintain her country because of her population problems vis-a-vis her size and the fact that Russia has no economy, and according to a recent article published by Pravda, people in the government are openly advocating for a return to USSR economics and the formation of a completely protectionist economy with state-run economics.

– A political scientist from Kazakhstan, Mars Sariev, told me: Russia needs to act as the tsar-father acted, how the USSR acted, that is, to take protectionist positions, and not capitalistic competitive ones. Protect us more, be our patron.

– This means: “Build factories for your money, through poverty,” depopulation “of the central regions of Russia, and then we will tell everyone else how you oppressed us for 70 years.” We have been through this already.

– I also said that … For them, the main thing is money. They need the money that China, perhaps America, will give, but Russia will not. And they hold on to Russia because (also a frequent slogan) Russia provides security. If there weren’t a threat on the borders of Kyrgyzstan and Tajikistan, if Armenia didn’t have Azerbaijan close by, then they would not need our country.

– Apparently, they are right. The Baltic countries bathe in European money, Ukraine – in American money, the population in response for some reason scatter in different directions around the world. And now, even in the United States in the distant Minneapolis are drivers from Ukraine. If they are satisfied with such unlimited help – full speed ahead. You are independent, sovereign, and you are in your hands. (source)

The problem is that such is what Russia already has, and it has not served her. She can blame other nations all she wants, but the fact is that the only money Russia makes is from trade with other nations, and that takes the form of either selling crude oil, raw timber, or exporting cheap weapons to poor nations. That is all.

Ask yourself, where are the Russian cars? Computers? Foodstuffs? Tools? These are things that many nations make and sell to each other because whether one likes another person or not, wealth comes from the exchange of value with others, not trading with oneself in a protectionist environment. This is why a nation like Brazil, which is wracked with serious problems and in many ways is “third world”, has an economy that is significantly stronger than Russia’s.

Russia is not getting better, and plans to return to a Sovietesque model are doomed to fail because it was Soviet economics and policies that inflicted so much damage over seven decades that Russia still has been unable to recover from fully. Russia is now, when one considers her economics, population, birthrates, development, migration, and prospects much weaker than she was either at the formation of the USSR or before World War II.

Putin can position himself how he wants, and many attempts can be made and are being made to improve Russia, but reviving the veritable state-worship of the USSR and the enforced delusions about realities in the name of patriotism and “tradition” is not going to help her long-term. If anything, it may further contribute to ethnic fractioning and eventually, a breakup of Russia.

The Karelia issue is a lot more than just about whether or not this plan existed as Gorbachev relates. It is about Russia attempts to consolidate her territorial claims and also expand them, but while trying to keep control over her nation that is falling apart before her.