You are here: Home › Boston Dynamics Puts Robot Dog Of Internet Fame Up For Sale 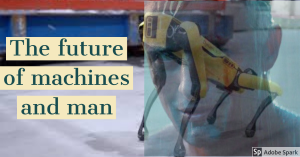 A few years ago, the world was shocked by the progress of robotics in the modern era as exemplified by “Spot”, a robotic dog developed by the technology corporation Boston Dynamics, that integrates AI and machinery into a futuristic creation of metal, wires, and computer parts.

But what is perhaps even more amazing is that, while he has an expensive price tag, Wired.com reports that Boston Dynamics has now put “Spot” for sale to the general public.

SPOT, BOSTON DYNAMICS’ famous robot dog, dutifully follows my every command. The machine traipses forward, then automatically scrambles over a raised bed of rocks. I make it side-step. I command it up a flight of stairs, which it tackles with ease. It meets its match when I steer it at a medicine ball, though; it takes a tumble, and for a moment lies paralyzed on its back. But with a click of a button, Spot twists and rights itself, and recommences its ramblings.

Such unfailing obedience, yet I’m nowhere near Spot, which is roaming about the company’s testing grounds in Boston. I’m piloting the robot through my web browser from the comfort of my apartment in San Francisco, 3,000 miles away. With almost zero latency, I either use the robot’s front camera feed to click on bits of terrain—think of it like scooting around in Google’s Street View—or flicking my keyboard’s WASD keys in the most expensive videogame imaginable.

Just how expensive, Boston Dynamics is finally saying: $74,500. As of today, businesses, developers, and academics can buy Spot—max two per customer, well short of what it would take to assemble a pack of robot dogs. Until now, the company has only leased the robot to select early adopters. It worked with these lucky few to get the robot ready for life in the real world, and in large part to determine what this mesmerizingly dexterous machine might actually be good for.

This kind of extreme remote operation is a window into Spot’s budding career. Through the web interface, I can bring up feeds from the cameras dotted along the robot’s body. It uses these to path-find and detect obstacles like stairs; control algorithms then automatically move its legs so as to not plummet down them. A construction company, for instance, might program Spot to take a route around a work site, taking pictures of progress along the way. But at any time, a remote operator can take control of the robot—the latency is surprisingly minimal because the bandwidth between the operator and the machine is a mere half megabyte—and send it someplace too dangerous for humans.

“So we’ve seen that in manufacturing, mining, electric utilities, even to some extent more [hazardous] environments over the last several months as Covid has started impacting the ability to actually access a work site,” says Michael Perry, vice president of business development at Boston Dynamics. Indeed, Spot (with a tablet mounted on its face) recently went to work in a Boston hospital, helping screen patients for the disease. This is the promise of Spot and any number of other increasingly sophisticated robots: We want them to do the dull, dirty, and dangerous work—collectively known as the “three Ds” in robotics—that shouldn’t mean humans have to risk their lives. (source)

I have said before and I will say it again- robotics and artificial intelligence will be two major trends that will direct the future, including those which will drive a third world war.

This is part of the normalization of robotics in human life. We are witnessing a transition- a revolution -as great as the Internet and Industrial Revolutions, and perhaps greater.

What is happening today was discussed by philosopher as a sort of merging between man and machine. That is, while man and machine will work in symbiosis, there will be an increased attempt to “evolve”, as Shoebat.com has covered, by directly integrating machines into man’s own body to the point that the machine will be considered to be the superior part and the human part the inferior one. This is not medical devices or other good things that help people, but rather the “mechanization” of man as an inversion of creation and the attempted rule of man over God in a reflection directly from Eden.

Spot is not that- but he is a step on the way to the legitimization of machines in daily life.

Expect to see a lot more robots and AI in the future- they will be very helpful and useful, and do a lot of good things. But as their presence increases, also expect to see an increase in this philosophy, and the latter is what is driving the advancements to the former.

Left Wing Fanatics Start Taking Down Statue. They Attack A Man Who Tried To Defend The Statue. The Man Takes Out His Pistol And Shoots One Of The Fanatics
Shoebat.com Warning Resonates Again As Soldiers Killed In Northern India Over Territory Skirmish Between China And India
Follow