You are here: Home › Shoebat.com Warning Resonates Again As Soldiers Killed In Northern India Over Territory Skirmish Between China And India 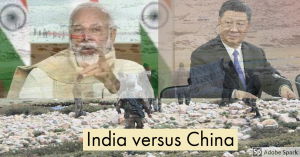 I have been saying for a long time at Shoebat.com that the US will not help Indian Christians because she is preparing for a conflict with China and is attempting to build up India to use her as a hedge against the Chinese, pitting the third and fourth strongest militaries and first and second most populous nations in the world against each other. China has aspirations of becoming an imperial power, and is attempting in the worst way to “assert” herself on the world stage, which in typical Chinese fashion usually involves taking a very aggressive, anger-inducing approach or being unable to either lie or bluff without looking like an unstable maniac.

As the world continues her march towards war, the Hindustan Times has followed up on the conflict that left 20 Indian soldiers and 40 Chinese soldiers dead after what appears to have been an intentional Chinese raid and President Modi responding with promises to increase security and prepare for future conflict with China.

India wants peace but is capable of giving a befitting reply if provoked, Prime Minister Narendra Modi said on Wednesday, his first remarks on the border clash between soldiers of the Indian and Chinese army in eastern Ladakh on Monday evening. PM Modi’s sharply-worded statement was aimed not just at reassuring the country that the government was taking steps to protect India’s sovereignty but was also designed to deliver a stern message to Beijing.

India has always promoted peace among nations, PM Modi said on Wednesday afternoon. PM Modi, who is meeting chief ministers via video conference on the Covid-19 pandemic, started with a reference to the border clash in Galwan Valley that cost 20 lives on the Indian side.

Over the next five minutes, PM Modi summarised his government’s stand on the clash and his determination not to let anyone stop India from retaliation if someone does target the country’s sovereignty.

In our neighbourhood, India’s constant effort has been that differences should not become disputes, PM Modi said a throwback to one of the principles that India and China had pledged themselves to at his meetings with Chinese President Xi Jinping.

India has blamed China for the border clash that New Delhi says could have been avoided had the Chinese soldiers scrupulously followed the agreement and not tried to unilaterally change the status quo in the Galwan region.

Colonel Santosh Babu and his men were outnumbered by the Chinese troops who attacked the Indian soldiers, but they still struck back at their adversary. In the process, Col Santosh, according to one estimate by the army, killed or critically injured over 40 Chinese soldiers including a commander of the People’s Liberation Army.

PM Modi referred to the extraordinary courage that they displayed.

“The country will be proud to know that they died after they killed their adversaries (Desh ko Is baat par garv hoga ki vae maarte, maarte, maren hai),” PM Modi said.

The Chinese military or the foreign office has not made public the casualties suffered by the PLA.

Officials said PM Modi’s statement had omitted any reference to dialogue to signal that the government was not looking for a way out. To the contrary, PM Modi underscored that no one could stop India from hitting back if its sovereignty was targeted.

“I would like to assure the nation that the sacrifice of our jawans will not be in vain. For us, India’s unity and sovereignty is the most important and no one can stop us from protecting it. No one should have a doubt on this point. India wants peace but is capable of a befitting reply in every circumstance,” PM Modi said. (source)

Modi is not good, and he is going to severely hurt Indian Christians. However, in terms of public relations, he seems to be winning the PR war, as his attempts to address the incident and explain it versus the Chinese silence in the claims of assertions they started the conflict by attempting to illegally annex territory and change boundaries suggests that China is indeed the culprit and is trying to hide from addressing the matter.

This ultimately works to China’s disadvantage. The world already looks at China like an unstable, lying fool after the COVID-19 spread, for regardless of what one thinks of COVID-19, the fact is how she handled the matter ultimately has been more damaging that the virus itself has been because nobody trusts her now. With factories moving out of China and into India, China’s attempts to seemingly assert herself on Indian territory are not backfiring on her again and serve merely to confirm the impression of China as an unstable and power-hungry monster that needs to be restrained by force.

The future is going to be very interesting, but considering what happened recently, a future conflict between India and China will inevitably be a slaughter on all sides, with a lot of people being killed.