You are here: Home › Fed Claims That COVID-19 Is Stopping The Flow Of Change In Currency, But Could There Be More? 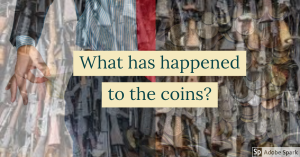 Coins can be found on the ground, in one’s pocket, in the cracks of a chair, or other places, but they are having a harder time being found in stores today as CNBC reports that banks are reporting coin shortages, to which the Federal Reserve Bank has replied this is true and it is because of the effects of COVID-19.

Federal Reserve Chairman Jerome Powell told Congress on Wednesday that the circulation of physical coinage has ground to a halt amid the coronavirus outbreak but that the central bank is working to fix the flow.

The topic came to light after Rep. John Rose, R-Tenn., said banks in Tennessee are reporting that they’re receiving smaller-than-usual sums of coinage each week. Rose asked Powell if the central bank was aware of any shortages in the production and distribution of currency, and if there are plans to boost the allocations to their usual levels.

“What’s happened is, with the partial closure of the economy, the flow of coins through the economy has … kind of stopped. The places where you’d go to give your coins and get credit … those have not been working,” Powell said.

The spread of Covid-19 across the U.S. over the first half of the year has led to a rise in contactless payments as more Americans shelter in place and shop online using PayPal or credit cards. But unprecedented, state-imposed business closures also resulted in a deceleration in the rate at which physical cash and coinage exchange hands. (source)

However, could there be more than this?

It is known for a fact that COVID-19 has caused a push towards “cashless” forms of payment, and this may be a role. However, there is also a suspicious about another issue, which is the value of the coins themselves in terms of metal.

Note that with the COVID-19 virus, there has never before been more paper money in circulation. This is because paper money is just like printer paper- you can print it endlessly and cheaply. However, this has the unfortunate effect of being able to do what has happened throughout history, which is to print the currency until its vision in the public eye becomes what its intrinsic value is, which is that paper that it is printed on. Coins to the contrary can never actually go worthless because they are made of metal, and metal always carries value, even cheap metals such as iron and steel.

In the current times, copper, nickel, and zinc are used to make coins. Likewise, all three of these metals are used heavily in construction as well as in military applications.

I do not have direct proof. I cannot make absolute claims and I do not pretend to. However, the fact that there is a shortage- a claimed shortage -of coins does not make sense. Instead, one might think there could be a larger-than-average number because people are using coins less and as such, they are sitting in banks.

I could be wrong. In fact, I hope I am wrong and that what the Fed says is true because it would be the more positive option. What I am suggesting here, and this would need to be clarified by further details not available right now, is that that these ‘shortages’ may exist because of another reason, one potentially political, but more importantly, one that may be related to military production, as metals always go into shorter-than-average supply when military production increases. One only need to remember the famous and valuable (to a collector) steel pennies that were issued in 1943 due to copper metal shortages in the Second World War.

What this suggests to me is that the common man needs to continue getting ready for further shortages in the future of not just metals, but also food and other supplies because the supply chains and resource pools that provide them may dry up or be dried up.

Remember what happened at Wal-Mart. Don’t get caught fighting for toilet paper with the rest of the country.