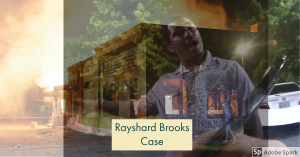 In an update to the ongoing case of Officer Rolfe and the shooting of Rayshard Brooks which we have been covering at Shoebat.com, AP News reports that Officer Rolfe is being charged with felony murder.

Prosecutors brought murder charges Wednesday against the white Atlanta police officer who shot Rayshard Brooks in the back, saying that Brooks was not a deadly threat and that the officer kicked the wounded black man and offered no medical treatment for over two minutes as he lay dying on the ground.

Brooks, 27, was holding a stun gun he had snatched from officers, and he fired it at them during the clash, but he was running away at the time and was 18 feet, 3 inches from Officer Garrett Rolfe when Rolfe started shooting, District Attorney Paul Howard said in announcing the charges. Stun guns have a range of around 15 feet.

“I got him!” the prosecutor quoted Rolfe as saying.

The felony murder charge against Rolfe, 27, carries life in prison or the death penalty, if prosecutors decide to seek it. He was also charged with 10 other offenses punishable by decades behind bars.

The decision to prosecute came less than five days after the killing outside a Wendy’s restaurant rocked a city — and a nation — already roiled by the death of George Floyd under a police officer’s knee in Minneapolis late last month.

“We’ve concluded at the time that Mr. Brooks was shot that he did not pose an immediate threat of death,” Howard said. (source)

Fed Claims That COVID-19 Is Stopping The Flow Of Change In Currency, But Could There Be More?
Trump May Lose To Biden
Follow