You are here: Home › Trump May Lose To Biden 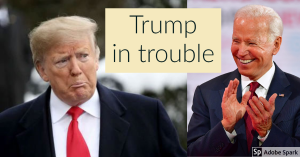 I have said before that unless circumstances change, Trump was likely guaranteed a 2020 victory.

However, as I have been noting, not only are the circumstances changing, but they have changed, and quite significantly, so much that the New York Times reports that there is a chance that Trump really may lose in the 2020 elections.

Rather than focus on plans and goals for another four years in office, Trump has been wallowing in self-pity about news coverage of him since the beginning of the coronavirus pandemic, people who have spoken with him said. He has told advisers that no matter what he does, he cannot get “good” stories from the press, which has often been his primary interest. “These people,” Trump has growled to advisers about reporters, throwing an expletive between the two words.

He has complained that nothing he does is good enough, bristling at criticism that he hasn’t sufficiently addressed the death of George Floyd, a black man killed by the police in Minneapolis. The remarks he made about Floyd when he attended the launch of the SpaceX shuttle should have been enough, the president told aides.

Trump has also become consumed, once again, with leaks from the White House, demanding that officials find and prosecute those responsible for information getting out about his trip to the bunker beneath the White House during unruly protests. And while he has shown enthusiasm for resuming his trademark rallies, he has not seemed excited about the possibility of governing for four more years, people close to him said. He has set up villains to blame if he loses — China’s mishandling of the coronavirus, the shutdown of the economy, and Democrats who he has told advisers will “steal” the election from him.

Aides acknowledged that he has always had difficulty controlling his behavior, which goes far beyond the bounds of traditional presidential conduct. His penchant for using racist language — such as the tweet about shooting looters — is something that has long defined and undercut his presidency. But his recent behavior and remarks, and his inability to move beyond them, strike advisers as different from his usual aberrations.

The New York Times interviewed more than a dozen people who speak or interact with the president frequently, including current and former White House aides, campaign advisers, friends and associates. Most spoke on condition of anonymity to candidly discuss internal White House affairs, and to avoid retribution. They would like to see him win again, but say they’re struck by how his demeanor has shifted during this latest dire threat to his presidency.

With less than five months until Election Day, Trump has seemed mostly unable, and unwilling, to make the modifications to his behavior that he was periodically able to make at key moments in 2016: agreeing to pick Mike Pence, a demure and religious conservative he had no previous relationship with, as his running mate, and quieting his Twitter feed in the immediate runup to Election Day.

“In private, Trump was interested in winning the presidency,” said Sam Nunberg, who worked on Trump’s campaign in 2015 and was an adviser to him before it. “Over a three-year period between 2012 until 2014, he was focused on the details and even the minutiae of the primary and the general election process. It was always clear that Trump wanted to be elected president. But the reality of being president was never discussed.”

In 2016, Trump repeatedly offered policy suggestions in speeches. He has yet to lay out what he would do with a second term.

Inside the White House, some staff members described the president as lonely, with few people he enjoys talking to, and several staff members said morale was at its lowest point since the early weeks of the administration.

The West Wing in which Trump has been in virtual lockdown since March lacks a clear sense of urgency or purpose, recent visitors say. Mark Meadows, the fourth White House chief of staff, has complained that he had no idea how fractious and unwieldy the climate was until he got there, according to multiple people familiar with his conversations. (source)

Biden is a terrible choice. It’s pretty obvious. However, look at Trump. Blame whoever one wants, Trump has shown a clear lack of leadership, direction, and meaning to his presidency for the last four years, and the crisis of this current year is sealing this in the public mind. Trump has NOT shown leadership- he has allowed chaos to run amok.

At the rate that things are going, if Trump is going to win in 2020, it would not be a surprise to see a lot of “funny patterns” in key swing voter states emerged, or perhaps another outbreak of COVID-19, because if things are going to shift to his favor, it is going to take a lot to get him into office, for as deficient as Biden may be, Trump is appearing in the eyes of far too may to be a worse choice than Biden.

The 2020 election may then be more interesting than previously predicted.