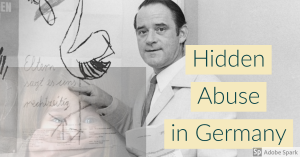 Does one wave raw meat in front of lions and not expect to be eaten? Likewise, one does not put children in front of pedophiles an expect them to not get sexually abused. However, this is what happened as the German government allowed children to be systematically placed with pedophiles for three decades and did nothing about it.

A study conducted by the University of Hildesheim has found that authorities in Berlin condoned this practice for almost 30 years. The pedophile foster fathers even received a regular care allowance.

Helmut Kentler (1928-2008) was in a leading position at Berlin’s center for educational research. He was convinced that sexual contact between adults and children was harmless.

Berlin’s child welfare offices and the governing Senate turned a blind eye or even approved of the placements.

Several years ago two of the victims came forward and told their story, since then the researchers at Hildesheim University have plowed through files and conducted interviews.

What they found was a “network across educational institutions,” the state youth welfare office and the Berlin Senate, in which pedophilia was “accepted, supported, defended.”

Kentler himself was in regular contact with the children and their foster fathers. He was never prosecuted: By the time his victims came forward, the statute of limitations for his actions had expired. This has also thus far prevented the victims from getting any compensation.

The researchers found that several of the foster fathers were high-profile academics. They speak of a network that included high-ranking members of the Max Planck Institute, Berlin’s Free University, and the notorious Odenwald School in Hesse, West Germany, which was at the center of a major pedophilia scandal several years ago. It has since been closed down.

A first report on the “Kentler experiment” was published in 2016 by the University of Göttingen. The researchers then stated that the Berlin Senate seemed to lack interest in finding out the truth. (source)

Note the part highlighted in bold, which is our emphasis, since we have written extensively about the Max Planck Institute before and its connections to National Socialism and eugenic experiments, including its sodomite head for the Evolutionary Archaeology division, Svante Paabo.

Now, I am NOT saying that Paabo was involved. However, we know that:

-He is a homosexual

-He is a high ranking member of the Max Planck Institute

We know for a fact that there is a statistical relationship between child sexual abuse and the LGBT that is consistent throughout organizations and cultures. One of the best examples of this is in the Catholic Church, which despite having the lowest overall rates by percent (4%) of clergy involved in sexual abuse, the John Jay Study of 2004 showed clearly that it was 80% of abuse cases that involved males sodomizing other males, of which approximately two-thirds were post-pubescent teenagers. This is why when Milo Yiannopoulos in his interview with Michael Voris that Shoebat.com covered when both agreed that lowering the age of consent to sixteen was ‘a good idea’ was so scandalous, considering Voris’ “past life” as a “former” homosexual, and Yiannopoulos’ history as an active and notorious homosexual, because it was floating the idea of giving legitimization to sexual abuse that happened during the abuse crisis.

What I am saying as it concerns Paabo is that one has to wonder, naturally, if he may have been one of the persons involved.

But returning to Kentler, he seems to have been a very disturbed individual. DW reports that Kentler contextualized sexual abuse as ‘research’ and ‘sexual liberation’ for teenagers. Der Spiegel reports that Kentler’s work, which involved having children get molested, was part of an ‘anti-fascist’ project.

Of course it would have been interesting to take such a text and such an author really seriously and to analyze them. But that’s not what Soboczynski is about. Because right in the second paragraph history policy is done at the speed of a train: “Kentler’s position was soon mainstream,” writes Soboczynski. “Sexual liberation was considered an anti-fascist project.” (source)

So what was Kentler exactly doing? Was this a political project mixed with ideas about sexual abuse masquerading as science in a sort of frankenstein-like experiment? One does not know. What we do know is that the German government was completely aware of the experiments, that many children were sexually abused as a result of these experiments, that they reached the highest levels of the German government and society, and that the core seems to be, just as Kentler was, a group of homosexuals. Likewise, since the Max Planck Institute is listed by name, given their connection to eugenics that pre-dated and took place during the Third Reich, one has to wonder if these “experiments” were a part of something related to a psychological-military-intel operation of some variety.

The FDP members of the Bundestag also dealt with the topic: At a parliamentary group hearing in 1981, sex researcher Helmut Kentler was allowed to speak. He reported on a project in Berlin in which he accommodated 13- to 15-year-old boys who suffered from “secondary idiocy” with pederasts: “These people only endured these idiotic boys because they fell in love with them, had a crush on them and were fond. ” The report apparently did not irritate MPs, and there were no interruptions or inquiries.(source)

No matter how many questions one may have, we can be certain that the whole thing was no accident.

This report in a German context seems to echo of similar things heard about in the US and UK with the pedophile rings involving Jeffrey Epstein or Jimmy Savile and their ties to the most powerful people in the Anglosphere. Likewise, this is also interesting to note in that the major power of Russia has long been a center of child sexual abuse and trafficking, as a tremendous amount of the videos and other materials produced come from her, and there have also been noted strong homosexual and occult undergrounds in the halls of great power.

Thus revelations about such abuse should not be looked at as something unique, but an extension of a series of scandals taking place in many countries in the west that are happening in more than one country.

It was said that before World War I, there was a tremendous occult ‘revival’ that happened with a lot of abuse taking place of children involved. Unfortunately, as the world is now barreling full speed ahead into another major war it seems, there is a similar pattern from the past also going on.

Germany was not stupid. She knew what she was doing. In fact, arguably this may not have even been about pedophilia at all in the sense of a scientific experiment, but rather a spiritual one, since it seems that based on the New Testament and history and what has been written about, the abuse of the innocent, especially children, seems to be a gateway into unlocking the forces of all things preternatural for one who would seek, insanely and foolishly as one never ‘controls’ them, to harness the forces of darkness for one’s power in this life but coming at the expense of one’s soul in the next life.

It would be of great interest to know if additional information about Kentler and his ring of abuse comes out.