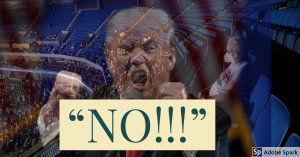 Presidential candidate rallies are common. People want to “support their player” for their particular political team. However, Trump’s recent rally, unlike those of 2016, was far from stellar. In fact, one might say that the rally rallied no-one at all as MSN News reports.

President Trump’s attempt to revive his re-election campaign sputtered badly on Saturday night as he traveled to Tulsa for his first mass rally in months and found a far smaller crowd than his aides had promised him, then delivered a disjointed speech that did not address the multiple crises facing the nation or scandals battering him in Washington.

The weakness of Mr. Trump’s drawing power and political skills, in a state that voted for him overwhelmingly and in a format that he favors, raised new questions about his electoral prospects for a second term at a time when his poll numbers were already falling. And rather than speak to the wide cross-section of Americans who say they are concerned about police violence and systemic racism, he continued to use racist language, describing the coronavirus as “Kung Flu.”

While the president’s campaign had claimed that more than a million people had sought tickets for the rally, the 19,000-seat BOK Center was at least one-third empty during the rally. A second, outdoor venue was so sparsely attended that he and Vice President Mike Pence both canceled appearances there. (source)

I said before that Trump had a decent chance at winning if there were no major mess-ups. However, this did not happen. Between COVID-19 and the current racialist nonsense taking place- the “Black Lives Matter” rallies-and-violent-looting-sprees, the constant chanting of “THAT’S RACIST” while the same people making this statement make their own racist remarks openly, and others -has pushed people to their mental edge because Trump is doing NOTHING.

In electronics, there is a concept with diodes (a common part) called “breakdown voltage”, which is after a certain amount of voltage is applied, then like a gate, the diode no longer resists electric current, but allows it to pass through.

It is true that racialism was a strategy used by Trump. However, I have speculated before and will repeat it seems that this strategy has, like a diode to which too much voltage has been applied, has reached its “breakdown point” for the public, but unlike a diode, it is hard to turn down the clamor of society once control is lost over public anger no matter how skilled a manipulator one may be.

People are really mad at Trump. He was given a truly golden opportunity, and he has blown it, and appears to be wallowing in self-pity instead of taking charge as a leader.

I don’t care what party one is a member of. With riots and social chaos that is clearly being permitted, people are tired of the violence, and they are also tired of being called ‘racists’ when they are not, and they are tired of this argument. It’s not helping Trump either, but just making the public mad at him because his ‘leadership’ he brags about is not present. .

This recent rally is proof of this. People are not just refusing to attend because of COVID-19- for many are ignoring the social distancing requests and are still going to rallies and protests -they are likely not going because they do not like him.

Now that the situation has changed considerably, as I noted before in an update to my thoughts, I suspect that this coming fall’s election will be more interesting than the 2000 election with Bush. Before it was just “pregnant chads”, “hanging chads”, “dimpled chads”, and “swinging chads”, but with Trump, who knows? At this point, if he is going to win, there is the distinct possibility that massive voter fraud may have to be required in order for him to win. But with COVID-19 and the disruption it has caused, it might be the perfect cover to orchestrate the curious disappearance of ballots or reappearance of them in other areas, especially in key states such as Florida, Michigan, Ohio, or Wisconsin. Likewise, given the chaos that has been the Trump presidency, why should one expect any less during the 2020 election?

The fact that many Americans would be more willing to vote for a man who is showing serious signs of dementia and other cognitive decline versus Trump says what people think about him.

Trump is in a lot of trouble, but unlike bankruptcy court or his past, there is little that he can do legally to manipulate himself out of this situation, as it might be the most challenging one he has ever faced because he is being forced to deal with reality, and the reality is that the people really don’t like him and if he wants to stay in power, he may have to make some very difficult decisions fast.