You are here: Home › Florida Hospitals Running Out Of Intensive Care Units Due To COVID-19 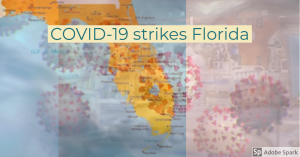 As part of our ongoing coverage of the COVID-19 Coronavirus pandemic, we have been noting that in addition to the fact that scientists are expecting a second wave around the world and in the US (some who are saying that such has began in China), the pandemic continues to spread. According to a recent report from Newsweek, Florida’s hospitals are running out of Intensive Care Units as they try to deal with the increased number of cases.

As Florida health officials report another record single-day increase in cases of the novel coronavirus, new data shows hospitals across the state have filled most or all available beds in their respective intensive care units.

Numerous Florida medical facilities reported dwindling ICU bed availability on Thursday, with several reporting no availability at all, according to the latest report published by Florida’s Agency for Health Care Administration (AHCA). Palm Beach County was among those statewide regions where the availability of beds was most scarce. An accompanying report from AHCA shows about 75 percent of available hospital beds statewide are currently occupied.

The AHCA’s data showed two of Palm Beach County’s 17 hospitals have already filled all ICU beds, while several other medical centers reported limited availability. One hospital in Miami-Dade County has also reached its ICU bed capacity as of Thursday, and the majority of hospitals have filled more than half of beds in intensive care units. Palm Beach and Miami-Dade counties have reported two of Florida’s most severe local virus outbreaks.

More than 12,500 people have been hospitalized with virus infections in Florida since the start of the pandemic, according to the state’s Department of Health (DOH). The number accounts for all patients admitted to medical facilities, so Thursday’s daily total is unclear. (source)

Is A Second Stimulus Check Coming?
Putin Is Going to Go For Another Presidential Term
Follow