You are here: Home › Is A Second Stimulus Check Coming? 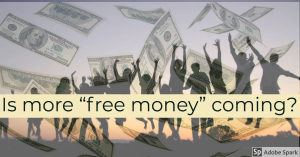 Money may not grow on trees, but it certainly seems to grow from the Federal Reserve Bank, which according to CNET news after discussions in Congress and statements from government, there appears to be a second stimulus check in the making that may be issued as early as July.

The House of Representatives passed its proposal for a second stimulus check in May, bringing fresh promise of up to $6,000 in a second round of stimulus money for US families. But according to Senate Majority Leader Mitch McConnell, the House bill “basically is going nowhere. It wouldn’t pass the Senate. It couldn’t be signed by the president,” he said June 19 at King’s Daughters Medical Center in Ashland, Kentucky.

McConnell added that if Congress does pass another rescue package, “it will emerge in the Senate, it will be written beginning in my office, it will be done in July.”

President Donald Trump also talked about the prospects of a second stimulus package last week, saying something “dramatic” could come out of Washington soon that would include another economic payment check in 2020.

“I think we’re working on something that’s going to be very dramatic, very good,” the president said, responding to a journalist’s question as to whether Americans should expect another stimulus check this summer. “I think we are looking at a Phase 4. Phase 1, 2 and 3 have been fantastic for people generally,” Trump said, referring to three earlier economic stimulus packages from the federal government designed to help . Only one of those phases included stimulus checks for individuals and families. (source)

I don’t believe in printing money ad infinitum because it is not good. Ultimately, it devalues the currency. But at this point, why not?

For decades, the government has been privatizing corporate gains and socializing losses through massive financialization linked to the decoupling of the US dollar from the gold standard and the implementation of the full power of the ability of the Federal Reserve Bank to print money by fiat, which has lead to the decoupling of prices from historical norms by way of the overinflation of asset classes and the unnatural suppression of others to prevent fiscal equilibrium from being reached, and that is in order to increase profits through trade manipulation and imbalances that are a potential tool of war. Hence why China was sought after as a manufacturing center to the detriment of the American factory, as the US never intended to pay China back, but run up a tab on credit and use her fiscal position backed by military force to refuse payment on debts prior to an inevitable and calculated default.

The biggest loser after foreign nations is the American taxpayer who sees his income eviscerated in the name of social duty while being forced to shoulder more difficult debts with full responsibility. It is why Amazon and other major companies pay almost no taxes or no taxes while the average man slaving away is annihilated annually by taxes. It is all a giant scam.

At some point, it was inevitable that the ability of the government to maintain confidence in the currency would run out. We are very close to that point right now.

So what else can one do? Savings does not work because saving money whose value is in decline is like saving Weimar Deutschmarks- good for nothing more than kindling. The best thing to do is to use them to pay down debts or communicate them into tangible forms of value.

If the government wants to print money, let them print money and accept what is given because they know the game is almost over. But if one does this, it would be advisable to make sure that one’s own personal finances are in a form of currency or assets other than dollars because of the inevitable decline that is going to take place in the value of the dollar, right to the value of the paper which the dollar is printed on- zero.

Just make sure to use what one gets wisely in preparation for the future.