You are here: Home › DC Statehood Bill Passes In House 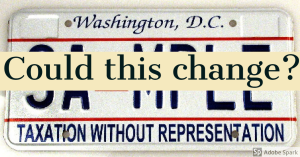 There is a license plate for those who live in Washington DC where it says “Taxation without representation”, signifying how DC is taxed but has no representation in Congress. The issue of DC representation has been a contentious issue for a long time, but for the first times since 1993, the issue of DC becoming a separate state has not only been raised in Congress, but has passed the House and is on the way to the Senate.

The House approved a measure to make Washington, D.C. the fifty-first state on Friday, marking the first time a D.C. statehood proposal has passed in either chamber of Congress. The legislation passed 232 to 180, with only one Democrat joining Republicans to vote against it.

The legislation, titled H.R. 51, would create the State of Washington, Douglass Commonwealth, named after Frederick Douglass. The district has a population of over 700,000 people, larger than the populations of Wyoming and Vermont. D.C. residents have no voting representation in Congress. Eleanor Holmes Norton represents D.C. in Congress as a non-voting delegate.

“The United States is the only democratic country that denies both voting rights in the national legislature and local autonomy to the residents of the nation’s capital,” Norton said in a speech on the House floor ahead of the vote. Norton also spoke about the importance of the vote in personal terms. (source)