You are here: Home › Trump’s Re-Election Polling Is Downright Awful 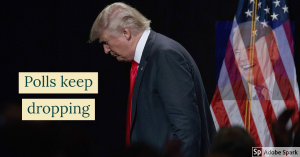 I have made clear that after having allowed for Trump to have his chance, it is pretty clear he has done a terrible job and it is not getting better. Trump does not manifest “strategy” but rather incompetence and confidence as acting, and debt as wealth. While the presidency is always a show and Trump an actor, not all shows can be hidden all of the time.

Polls do not necessarily indicate a winner or a loser of a coming election, but they do give an indication of where trends are leading. As many have noted, such as MSN News reports, the poll number for Trump are speaking for themselves, and they continue to drop against Biden.

On Wednesday morning, the New York Times released its latest national poll conducted in connection with Sienna College and it showed Biden with a massive 50-34 lead over Donald Trump. As Nate Cohn, the Times’s polling guru, noted in discussion of the poll on Twitter, that lead is so large it’s essentially invulnerable to assumptions about the demographic composition of turnout. Trump in the Times poll has an extremely narrow 1-point lead with white voters, wins the 50-64 age bracket by 1 point, and is actually losing senior citizens by 2 points. With numbers like that, basically any level of youth and non-white turnout where Biden enjoys huge advantages would be good enough to put him over the top.

The Times poll is particularly bleak for Trump, and even more worrisome for him, its underlying methodology which involves “weighting” the sample to party registration and not just demographic factors is a relatively Trump-friendly approach. And while some of Trump’s other polls are better, none of them are exactly good.

The RealClearPolitics average says Biden is up by 10.1 percentage points.

The FiveThirtyEight polling average says Biden is up by 9.8 points.

The Economist popular vote model says Biden is up by “only” 8.4 points.

Of course, the real election is decided in the Electoral College, but with numbers like these, the Electoral College can’t save you. FiveThirtyEight has the most detailed state-by-state breakdowns, and they show Biden comfortably ahead in Arizona, Wisconsin, Michigan, Pennsylvania, and Florida, augmented by narrow leads in North Carolina, Georgia, and Ohio and all tied up in Iowa. (source)