You are here: Home › Republican Governments Are Leading Conservatives To Their Deaths With Covid-19 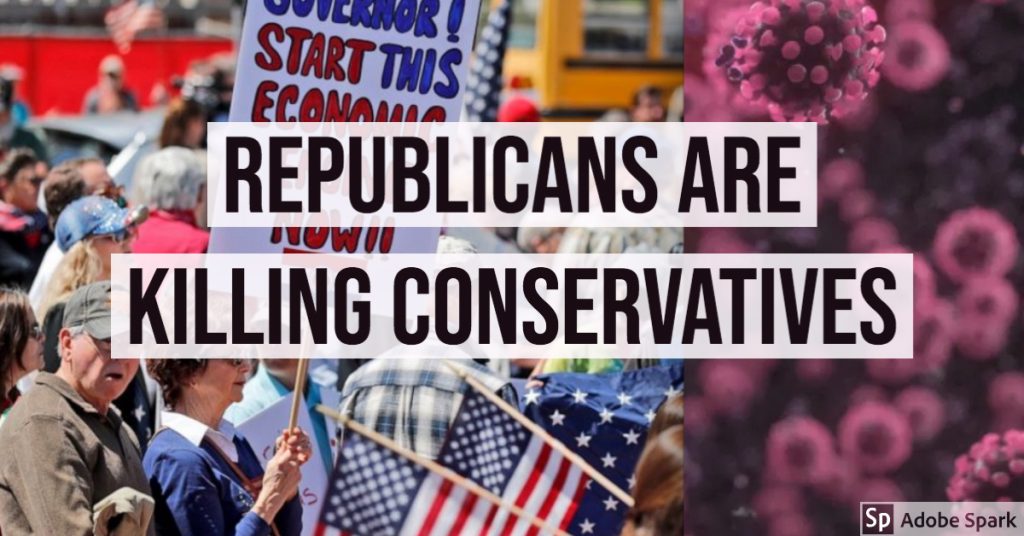 We are now seeing covid spikes in southern — Republican, really — states. Thus, we are seeing the results of Trump’s push for states to reopen. For decades we have been hearing from conservatives about how the Left wants to persecute and kill conservatives. But, in this case, its Republican governments who are encouraging their people to live life like normal and to reopen businesses. In this case, who is killing Republicans?

Because of the southern states’ insistence on reopening the economy and relaxing the covid mitigation measures, coronavirus is now surging in their populations. Texas and Florida have now been forced to reinstate some lockdown measures as both states have restricted bars where a lot of people have gathered together to drink alcohol. Greg Abbot, the governor of Texas, has decided to shut down all bars, while the government of Florida has banned the selling of alcohol in bars (since that is the reason why people go to bars in the first place). “It is clear that the rise in cases is largely driven by certain types of activities, including Texans congregating in bars,” Abbott said.
With the latest spike in covid infections — especially in the south — the US’ cases have surged to 40,000 cases a day. Greg Abbot, according to the Chicago Tribune, “not only resisted calls to order the wearing of masks but also refused until last week to let local governments take such measures.”

But these measures are being done too late, since the Texas government ignored warnings from health experts that reopening at such a time would be detrimental. Dallas County Judge Clay Jenkins, a Democrat who is the county’s top official, recounted:

“The doctors told us at the time, and told anyone who would listen, this will be a disaster. And it has been … Once again, the governor is slow to act. He is now being forced to do the things that we’ve been demanding that he do for the last month and a half.”

Texas’s covid numbers have boomed at a horrific rate, with 17,000 new cases being confirmed in the past three days, and with a record number of 6,000 cases on Thursday alone. Florida did not move to ban alcohol in bars until the state’s covid numbers were at 9,000 a day. One Florida local, Colleen Corbett, who is a bartender, even expressed her disturbance at how many young people have been flocking to bars after the lockdown was released: “It was like they forgot there was a pandemic or just stopped caring,” she said. Other states that have been hit the hardest are Arizona and Arkansas — both Republican states whose governors showed their defiance to the lockdown by refusing to enforce the wearing of masks. In fact, local governments within Arizona were prohibited from enforcing mask wearing by Governor Ducey. But recently, Ducey suspended any further easing of restrictions, allowing local governments to impose restrictions to curtail the spread of covid. A thousand medical professionals actually signed a petition urging the governor to mandate masks. Ducey has also directed business to develop policies in accordance to the Centers for Disease Control and Prevention, which had previously only been recommended. “There will be enforcement, and they will be held accountable,” the governor said.

Arizona did try reopening — against wisdom — but this has proven to be a disaster. As the Washington Post reports:

Maricopa County, which includes Phoenix, is recording as many as 2,000 cases a day, “eclipsing the New York City boroughs even on their worst days,” warned a Wednesday brief by disease trackers at Children’s Hospital of Philadelphia, which observed, “Arizona has lost control of the epidemic.”

To quote Dana Marie Kennedy, the Arizona director of AARP: “We have failed on so many levels”. She also said: “My level of frustration is high … We could have stopped this.” As the Washington Post reports: “Arizona is facing more per capita cases than recorded by any country in Europe or even more than the confirmed number of cases in hard-hit Brazil.”

This week, Arizona not only had a record number of covid cases for a single day — 3,591 on Tuesday — but also a record number for the use of impatient beds and ventilators for both suspected and confirmed cases. Public health experts have given a horrifying warning: hospitals could become so crowded that they will have to triage patients by mid-July, which means certain patients being sent home to make room for more. “If you’re in a bed, normally they’ll keep you for a few days, but they’re going to send you home with oxygen”, said Will Humble, a former director of the Arizona Department of Health Services. While Governor Ducey was obstinately against covid mitigation rules, he has now admitted that hospitals are “likely to hit surge capacity very soon. …This virus is everywhere”.

After a month of being reopened restaurants are again shutting down. This was only inevitable. People, filled with rebellion, accustomed to a certain comfortable lifestyle, and not heeding to wise council, want to live life as though it is back to normal. They really thought — and many still think — that if you reopen and let life be as normal, that life will just go on and people will live out their daily lives without any serious problems. This has proven to be a fantasy of Right-wing claptrap. They wanted the restaurants reopened because so many Americans cannot cook to save their lives or are too lazy to cook. Now the restaurants have to close down again because (surprise! surprise!) you cannot live normally in the middle of a pandemic. To quote Ross F. Goldberg, president of the Arizona Medical Association” “people thought it was back to normal times.” And they were wrong. People have to either suffer, or watch someone they care about suffer, to have the reality of covid sink into their heads. “I have to see somebody sick, directly related to me or close to me, in order for it to become like reality,” said Joshua Kwiatkowski to the Washington Post. “So it hasn’t really, I guess, sank in.” Kwiatkowski also admitted that he doesn’t want to wear a mask unless “an Uber driver is feeling some type of way or a store makes you wear it.”

We are in the midst of a global crisis, and yet people still insist on pushing their own political ideas or spread their bizarre political factionalism. Countries are even working to advance their own foreign policy, with Turkey wanting to expand in Syria and Libya, and Israel desiring to annex the West bank — in the middle of a pandemic. Human evil never ends, be it in good times or in bad times. Good times reveal the evil of people, for in times of comfort they will lavish themselves and still work to complete evil goals while never appreciating the good times. Good people will do good in good times, and they will do good in bad times.

While Turkey wants to conquer lands in the middle of a pandemic, the wicked amongst the American populace want casinos to conquer their wallets. The wicked want casinos, and they don’t give a damn how many tens of thousands die; their hands are gripping onto their dollars with itching fingers moved by a burning ache to spend them, to give money to mobsters while receiving little to nothing nothing in return, addicted to games ran by companies that get rich off of their vain chimeras of getting easy wealth. Nevada’s governor — who wanted the casinos reopened because she is a slave to mobsters — ordered the wearing of face masks in Las Vegas casinos and other public places, as if it will make a big difference with hoards of people who want drinks at a bar and will not be drinking with masks covering their faces. Such is the insanity of these demented and voracious people.

Mike Pence recently said that the US is “in a much better place” than it was two months ago, since daily deaths from covid are at about 600 per day, down from around 2,200 a day in mid-April. Some medical experts have said that they doubt that deaths will go back to those numbers due to advances in treatment and prevention, and since younger people — who are now the ones getting mainly infected — can handle the virus better than the elderly. According to the Washington Post: “Arizona has three times as many positive tests among people age 20 to 44 as it does in any other age bracket, according to state data.”

But infections are very high. A count by Johns Hopkins University notes that cases per day have eclipsed the previous high of 36,400, set on April 24th. Moreover, an analysis by the AP has concluded that the cases per day in the US have risen on average about 60 percent over the past two week.

Responding to the obvious carelessness and indifference to one’s fellow citizens that too many Americans have, Anthony Fauci urged Americans to be more mindful of their neighbors and take precautions to prevent the contagion from spreading. “A risk for you is not just isolated to you”, said Fauci. So far, covid has killed about 125,0000 Americans, in a country where people love to boast about how much they care about American life (only if terrorism or the party they don’t like is the threat). In addition, as we reported earlier, health experts believe that the deaths are being undercounted.

Trump pushed for states to reopen, and this is the result. The Right, for years, has talked about how the Left wants to persecute — and even kill — Republicans. But in this case, who is killing Republicans?

Trump’s Re-Election Polling Is Downright Awful
For Years We Have Heard About How The Left Wants To Persecute Conservatives, But Now Republicans Are Leading Conservatives To Their Deaths
Follow