You are here: Home › Is Trump Now Losing His Evangelical Supporters? 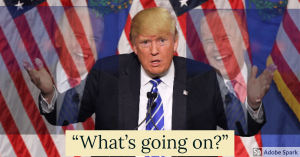 Trump is seriously losing support, and as Yahoo! News notes by way of the LA Times, he is at a serious risk of losing Evangelical support over the recent Supreme Court rulings on LGB and T issues.

White evangelical voters have been the staunchest supporters of President Trump, putting aside misgivings over his crass statements and messy personal life because of his promise to stack the judiciary with conservative judges sympathetic to their views on issues such as religious liberty and abortion.

The president successfully nominated two Supreme Court justices, giving the body a GOP majority. But recent rulings by the high court, notably a 6-3 decision expanding gay and transgender rights that was written by Justice Neil Gorsuch, Trump’s first addition to the bench, have drawn widespread criticism from evangelical voters and caused some to question the compromises they made in casting their last presidential ballot.

cThese rulings were a huge ‘slap’ in the face to all American Christians, and especially his evangelical base. Trump has already managed to make a lot of people hate him, and eviscerate his core supporters, but this may have been even more than what he expected.

It is true that the country is changing, but right now, the Boomer demographic that makes up a lot of his support among white Evangelicals (and Evangelicals in general) is still key to his victory, and the fact is that he is losing even this.

What good is a president who makes a lot of promises but then proceeds to do the opposite? This is what Trump has exposed himself to be, and no amount of blustery speech can hide it any more. It is too obvious.

There is much that Tucker Carlson says which we have criticized at Shoebat.com. However, a point that he made correct is noted below, taken from a larger article that appeared on FOX News where even he says that Trump is on his way to losing.

Not many people are saying it out loud on the right, but the fact is that President Trump could well lose this election. In fact, unless fundamental facts change soon, it could be tough for him to be reelected.

If the president does lose, that would mean that just a few months from now, Joe Biden would become the president. The United States government would fall under the control of the radicals who control Joe Biden, and they will remake the country.

Now, we’re fully aware that virtually nobody watching this show wants to hear that, but it’s true and key people around the president know that it’s true. They’ve seen the numbers. They’re concerned.

At some point in the future, historians will marvel at the fact that the president lost ground during a pandemic and then during mass riots. Both crises should have highlighted his strengths. They were naturals for him. (source)

This is the direct truth. Trump is doing very bad, and regardless of whether or not Tucker is being sincere, the point is that people on both sides of the political spectrum, left and right, can see that something is really wrong with Trump.

This is why I emphasize, if Trump does win, there is a very high chance one should expect some very funny ballot box practices, because under natural conditions, it is extremely unlikely that Trump is going to win anything. However, with a little manipulation in key states, even what seems mathematically impossible to happen could become a reality.

Given how 2020 has gone so far, at this point, why not a few more interesting events to round out the rest of the year?