You are here: Home › It’s Fascism 2.0 As The Fed Is Buying More Corporate Bonds Than Expected 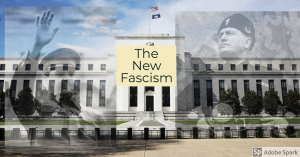 Fascism is most simply defined as the merger of state and corporate power. This is what people warned about, including Shoebat.com, with the entire “coronavirus stimulus” that was passed, for aside from giving check out to people, the package involved government writing down business debt in exchange for a percent of ownership. This is fascism in practice, as while there have always been companies that are state controlled, it happened on a very wide scale with major entities.

Now it has come out by way of Bloomberg and published on MSN News that the Federal Reserve was buying bonds for companies such as Wal-Mart, AT&T, and UnitedHealth.

The Federal Reserve bought bonds issued by companies including AT&T Inc., UnitedHealth Group Inc. and Walmart Inc. as part of its emergency lending program set up in response to the pandemic, according to new disclosures.

On June 16, the U.S. central bank began purchasing securities of individual issuers as part of a broad index it created to include companies that were eligible for the program.

The disclosures, posted Sunday, showed that of the $207 million of purchases made on the first day of buying, about 21% were of debt issued by firms in the consumer non-cyclical sector, while 15% were of consumer cyclical debt and 10% were of technology debt. Issues rated below investment grade comprised 3.6% of the securities acquired.

In a separate disclosure, the New York Fed released the composition of the broad index the central bank is using to conduct the purchases. Fed officials have said the goal of the buying is to maintain liquidity in the market for corporate debt, so that issuers are able to access capital despite the deep economic downturn created by the pandemic. The index is comprised of almost 800 issuers.

In mid-May, the Fed began buying exchange-traded funds invested in corporate debt as it readied for outright purchases. As of Tuesday, the Fed had amassed $8.71 billion of assets including ETFs and individual securities through the program, known as the Secondary Market Corporate Credit Facility.

On June 17, Fed Chairman Jerome Powell told the House Financial Services Committee that the central bank would reallocate purchases of ETFs toward individual debt securities through the index it created.

“Buying cash bonds is going to form the primary mode of support over time by which we support market function,” Powell said during the hearing. “Over time, we will gradually move away from ETFs.” (source)

This is not just buying debt in bond form- this is buying ownership.

A lot of small businesses are going to fail. This has been noted by many, and (for the most part) only the big companies will be left. However, if the big companies are state-owned by way of control of debt, this is not a revival of the “free market”, but a Sovietesque or Mussolinian type of state control by way of controlling debt just as with banks. It is slavery by debt as opposed to slavery by force, of which both are the same end but with different tools.

This is just the beginning too. One can only imagine what the nation will look like in five to ten years from now.