You are here: Home › Federal Reserve: US Needs Another Lockdown To “Save” The Economy 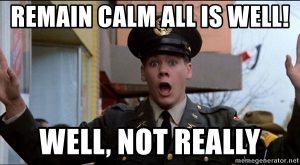 According to a story from The Hill, Federal Reserve officials are now saying the US needs another lockdown in order to “save” the economy.

The government should again impose strict coronavirus-related lockdowns for a month or longer across the U.S. in order to boost the economy, a top Federal Reserve official said Sunday.

Neel Kashkari, president of the Minneapolis Federal Reserve Bank, said the nation needs to control the spread of the virus, which is increasing across much of the country, to get back on a path to economic health.

“That’s the only way we’re really going to have a real robust economic recovery. Otherwise, we’re going to have flare-ups, lockdowns and a very halting recovery with many more job losses and many more bankruptcies for an extended period of time unfortunately,” Kashkari said on CBS’s “Face the Nation.”

To do so, he suggested strict shutdowns, which is contrary to what President Trump and many of his allies have been pushing in recent months as measures to aid the economy.

“I mean if we were to lock down really hard, I know I hate to even suggest it, people will be frustrated by it, but if we were to lock down hard for a month or six weeks, we could get the case count down so that our testing and our contact tracing was actually enough to control it the way that it’s happening in the Northeast right now,” Kashkari said. “They had a rocky start, but they’re doing a pretty good job right now.”

He warned the virus will spread throughout the country with flare-ups and local lockdowns for the “the next year or two,” causing more businesses to fail, without such measures.

“We’re going to see many, many more business bankruptcies, small businesses, big businesses, and that’s going to take a lot of time to recover from to rebuild those businesses and then to bring workers back in and re-engage them in the workforce. That’s going to be a much slower recovery for all of us,” Kashkari said.

He also said that Congress can afford large sums for coronavirus relief efforts, though Republican lawmakers are looking to lessen the amount of supplemental aid for unemployed Americans as part of the next relief bill.

“Right now, the U.S. can fund itself at very, very low rates. Congress should use this opportunity to support the American people and the American economy. I’m not worried about it,” he said. “If we get the economy growing, we will be able to pay off the debt.”

Kashkari also said he does not see evidence to support claims made by Republicans and Trump administration officials that the $600 federal increase to unemployment benefits is discouraging Americans from getting back to work.

“There’s just so many fewer jobs than there are workers available,” he said. “At some point, it’ll be an issue. When we get the unemployment rate eventually back down to 5 percent, and we want to get it back down to 4 percent or 3 1/2, where it was before, yes, that disincentive to work becomes material. But right now, it’s simply not a factor in the macro-economy that we have in the U.S. because we have so many millions of Americans out of work.” (source)

There is no saving the US economy.

As I have mentioned many times before, the problems with the US economy are directly tied to the debt issues. In short, the US is having the problems because she borrowed too much and spent it all and has no way to pay it back without destroying the value of the dollar and plunging the world into a major economic crisis.

There are only two solutions right now- a decades long global depression by way of deflation, or printing the currency to hyperinflation, and historically speaking, governments almost unilaterally do the latter for political reasons. Given how Trump printed 40% of the 2019 US budget with the recent Families First Coronoavirus Response Act, and how he is about to do the same with a second stimulus check, the answer is clear that the government is likely going to elect the latter instead of the former.

The only thing a second lockdown will do is to provide a cheap veneer of a political excuse for doing the latter. The economic death cycle is overdue and was going to happen anyways. This is an attempt at a justification for the public so political parties can play the act of blaming each other while taking no responsibility as the country burns.

Nobody is going to help you. You have to help yourself, and the best way to do this is by getting ready now. Work extra, save what one can, make the appropriate provisions now, and prepare for then next five-to-ten years of having a major economic storm with a lot of serious difficulties. All storms pass, but the issue is making sure that one can pull through it.

Now is not the time to listen to political talk, but to get to work while one still is able to do so.

France And Germany Want To Produce More Of Their Own Weapons, “Rely” Less On The US
Former Clinton Campaign Spokesman To Biden: ‘Don’t Debate Trump’
Follow