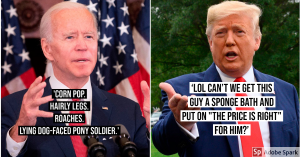 The 2020 presidential race seems to have the level of excitement of a geriatric checkers tournament, but according to a former Clinton campaign spokesman and reported by way of Fox News, he advised that Biden should not debate President Trump, and the answer is simple. It is because while Trump has no real arguments, he will be able to easily talk around the confused and very likely mentally-declining Joe Biden into making him look more foolish than what he has already been able to do on his own.

“Whatever you do, don’t debate Trump,” he wrote on CNN. “Trump has made more than 20,000 misleading or false statements according to the Washington Post. It’s a fool’s errand to enter the ring with someone who can’t follow the rules or the truth. Biden will undoubtedly take heat from Republicans and the media for skipping the debates. But it’s worth the risk as trying to debate someone incapable of telling the truth is an impossible contest to win.”

Trump supporters have poked fun at the former vice president for conducting many of his interviews from home. Trump’s defenders have also speculated about Biden’s overall health, and Biden’s refusal to debate could provide more cannon fodder.

Trump supporters have also said Democrats and their allies in mainstream media remember how effective Trump was in getting his message across to voters during live press conferences in 2016, and they do not want to give the president that kind of platform again.

Lockhart pointed out that many polls are unfavorable for Trump and “every quantitative signal and historical precedent points to a surefire loss for the President in November.” (source)

In spite of what many say, the overall trend is still in favor of Trump, but simply because Biden is such an absolutely miserable choice for a candidate.

If Trump does win though, be prepared for a Democrat 2024 victory a-la the Obama victory of 2008 with an energetic candidate that will charge the Democrat base. It’s all a part of the American political soap opera, where no matter what the party in power is, the story is always the same with just an occasional change in the actors and their roles.

Federal Reserve: US Needs Another Lockdown To “Save” The Economy
Germany Approved Millions In Weapons To Be Sent To Turkey To Help The Turkish Government Invade Syria
Follow