You are here: Home › What Is Going On With Microsoft And TikTok? 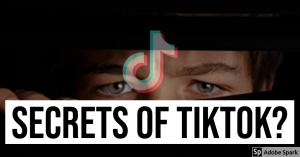 It seems as though every election, when real issues are troubling the public and need to be discussed, there always appears a series of “side issues” that distract the public from any matter of real importance. This election cycle, while there are several matters drawing attention from the failing economy, the remilitarization of Germany, the rise of Japan, and the fact that the US dollar is basically running as fast as it can down the road to hyperinflation, the issue of TikTok and “national security” has risen to public discourse as something people should take seriously as it has been presented.

I have discussed this before, but TikTok is NOT a national security issue. Yet, it is likely the Chinese are using it to spy, but most likely no different than what Facebook, Twitter, and other apps in the US do to people all the time. There is no reasonable expectation of privacy any more, and given the political conflict between the US and China, TikTok is right now being used, so it seems, as an extension of this argument, and perhaps more of a political show for the public to keep them distracted from real issues. Think the Iran-Contra affair, when Reagan was in talks with Iranian officials to keep the American hostages in prison until he was elected, so that way he could take political credit for having the hostages released and write himself into history as a hero.

As President Trump talks about banning TikTok, I found it very interesting that CNBC reports on how Microsoft has stepped in to offer to buy the platform for $30 billion dollars

Microsoft plans to finish its acquisition talks with TikTok within the next three weeks, ahead of the Sept. 15 deadline, CNBC’s David Faber reported Wednesday. The deal could be worth up to $30 billion.

If the deal goes through, Microsoft has already agreed with the U.S. government to bring TikTok’s code from China to the U.S. within one year. Faber also reported that the two sides haven’t landed on a price for TikTok yet, but it could be between $10 billion and $30 billion. Treasury Secretary Steve Mnuchin is “deeply involved” in process, according to Faber. President Donald Trump has said that the U.S. Treasury should get a cut of the acquisition, but it’s unclear how that would work or if it’s even legal.

Very few American companies have the bandwidth to transfer large amounts of data over to its own systems within a year, let alone afford the billions TikTok will cost. Microsoft checks both those boxes though. Microsoft could likely transfer TikTok’s software code, which could be up to 15 million lines of artificial intelligence, helping cement its position as the leading contender to acquire the company, Faber reported.

Microsoft confirmed in a blog post Sunday it has held talks with TikTok’s China-based parent company ByteDance to buy its business in the U.S., Canada, Australia and New Zealand. It’s currently the only apparent, leading bidder. (source)

Why do I find this so interesting? It has nothing to do with the recent discussions of Bill Gates and COVID-19, or even about the economic conflicts between Amazon and Microsoft taking place right now. Rather, it has to do with an open secret in how Microsoft seems to be promoting the sexual abuse of children and helping other people to do this as well.

There are several major search engines on the Internet. The largest and most frequently used one is Google, but Microsoft launched a competitor to it some years ago called Bing. This search engine, as people noted on message boards such as Reddit and 4Chan, was different because unlike Google, which according to these people does quite a detailed job of scrubbing results and getting rid of material related to child sexual abuse, the opposite was with Bing. In fact, some on these message boards have said that Bing is a practical dream search engine for pedophiles because with a few keywords one can easily pull up content of such a nature.

This is not just a speculation either. It is so bad that major news sites such as the technology news source CNET and even the New York Times reported that Bing is filled with such images that seem, in spite of talk about getting rid of them, to never go away.

Microsoft had long been at the forefront of combating abuse imagery, even creating the PhotoDNA detection tool a decade ago. But many criminals have turned to Bing as a reliable tool of their own.

The Times created a computer program that scoured Bing and other search engines. The automated script repeatedly found images — dozens in all — that Microsoft’s own PhotoDNA service flagged as known illicit content. Bing even recommended other search terms when a known child abuse website was entered into the search box. (source)

We know for a fact that TikTok:

(a) is app used frequently by Zoomers, many who are under the age of 18
(b) has a lot of videos of underage girls making videos of themselves gyrating in sexual ways or with skimpy clothing.

The prevalence of such videos is so open it has become a joke that comedians talk about.

If you put these two things together, does it not seem very suspicious that Microsoft, whose search engine seems to encourage as per public investigations from major news outlets, the proliferation of material related to or is outright abuse, and the fact that the company is publicly moving to purchase a very popular application whose prime platform is dominated by underage girls conducting themselves with while legally permitted, behavior that would incite the worst impulses of a pedophile or other abuser?

I have no proof of any “conspiracy” at all, or evidence that could clearly indicate that there is indeed a plot to this at the current time, or any person who could be tied to this. Rather, what we can say at most is that there is a very curious overlap between these two things, and because of this it should not be casually ignored, but watched to see what happens. First, it is to be seen if Microsoft follows through on the deal in question, and then if it does happen, what, if any, effects this will have on material placed on TikTok.

Will The 2020 Census Be Accurate?
Lebanese Officials Knew For Years That Tons Of Ammonium Nitrate Was Present In The Beirut Port. This Is Only Going To Intensify Anti-Government Sentiment In Lebanon
Follow