You are here: Home › If You Believe Russia Actually Has A Successful Vaccine Then Potemkin Villages Were Real 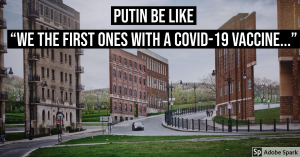 With the world scrambling from COVID-19’s effects and talk of a vaccine, there is a practical “race” to develop a cure. According to AP News, President Putin of Russia is declaring victory at developing the first vaccine for the illness.

Russia on Tuesday became the first country to approve a coronavirus vaccine for use in tens of thousands of its citizens despite international skepticism about injections that have not completed clinical trials and were studied in only dozens of people for less than two months.

President Vladimir Putin said while announcing the approval that one of his two adult daughters already was inoculated. He said the vaccine underwent the necessary tests and was shown to provide lasting immunity to the coronavirus, although Russian authorities have offered no proof to back up the claim of its safety or effectiveness.

“I know it has proven efficient and forms a stable immunity,” he said. “We must be grateful to those who made that first step very important for our country and the entire world.”

However, scientists in Russia and other countries sounded an alarm, saying that rushing to offer the vaccine before Phase 3 trials — which normally last for months and involve tens of thousands of people — could backfire.

“Fast-tracked approval will not make Russia the leader in the (vaccine) race, it will just expose consumers of the vaccine to unnecessary danger,” Russia’s Association of Clinical Trials Organizations said Monday, urging government officials to postpone clearing the vaccine without completed advanced trials.

The vaccine developed by the Gamaleya Institute in Moscow uses a different virus — the common cold-causing adenovirus — that’s been modified to carry genes for the “spike” protein that coats the coronavirus, as a way to prime the body to recognize if a real COVID-19 infection comes along.

That’s similar to vaccines being developed by China’s CanSino Biologics and Britain’s Oxford University and AstraZeneca.

The trials study will span several countries, including the UAE, Saudi Arabia, the Philippines and possibly Brazil, and involve “several thousand people,” Dmitriev said. In the meantime, the vaccine will be offered to tens of thousands of people who volunteer to be vaccinated. (source)

In the USSR and many authoritarian nations, it is common for these governments to construct cities or villages that look “perfect” simply to impress the world while hiding the horrible reality of what life is like in those places. Turkmenistan is an excellent example of this, which while spending lots of money on her capitol of Ashgabat and making fancy, sovietesque presentations to the world about how great she is, most of the nation is in dire poverty and misery to such a point that one-third of Turkmenistan’s population has fled to Russia never to return, causing a population crisis.

As I have said before, the US and her English counterpart have a history of telling lies to advance geopolitical causes, and while the Russians lie very poorly when they try, they are masters of bluffing, or giving the impression that they have something when they do not.

It is believable that Russia is working on a vaccine, but given their history, (a) how much is their own design versus stolen from another source (as there is a long history, like China, of stealing scientific advancements from the Western world), (b) how much is actually safe, and (c) how much of this is real?

If Russia truly has a vaccine that works, then I wish the best for them and hope they will share it with the world for the benefit of all because so many people are suffering- and I hope they do because it really does not matter who is “first” or not, but rather how people can be helped because people always come before politics.

However, as I have noted in my writings before, this virus has been highly politicized, and we know that Putin wants to revive Russia as the USSR in the image of his favorite leader who he pays extensive homage to, and who was a master of using Potemkin villages and other forms of bluffing, Iosib Jughashvili, a.k.a. Jozef Stalin. Putin is a master of image management, and even while Russia is crumbling from within from multiple threats and faces a high chance that she could break up in the next three decades, he is able to present an image through a sort of bragadoccio-rooted misdirection that makes Russia seem stronger, more unified, and more competent than what she actually is.

It would be illogical not only to question the speed at which such a vaccine supposedly has been developed, but the motivations and effectiveness of it given these circumstances as well as the greater historical context. It is telling that Russia’s own scientific bodies concerning the development of the vaccine are expressing open concern about the government’s actions, for regardless of what one thinks of Russia, a man of science who is honest about his work knows that discoveries, while they can have political consequences, ultimately are rooted in facts and not public image, and that rushing or trying to manipulate science to abnormal ends rooted in philosophies of power results in either people getting hurt or lies being passed off as truths. Russia knows this well, as it was for decades during the Soviet years that she promoted the pseudoscience of Lysenkoism that cause countless deaths and, given Putin’s love of Stalin (who avidly supported Lysenkoism), the philosophy is now suddenly reappearing in Russian scientific circles.

In other words, until there is sincere, concrete proof as to the effectiveness of the claims made about this “vaccine” and it starts being used by other nations, then just like many of the Soviet claims, it is as believable as a Potemkin village is a true representation of reality.