You are here: Home › Justice Dept: Yale Guilty Of Race Discrimination Against Whites And Asians 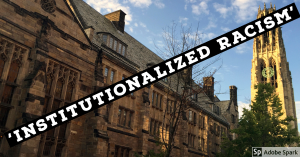 Many times when one hears about racial discrimination in the US, there is an assumption it is “Whites against (fill in race here)”. However, this is unfair, as racism is not privy to one group, but the potential exists in all men for this, regardless of the group. In an interesting ruling from the Justice Department against Yale University and reported on by the Wall Street Journal, it found that the famed Ivy League school discriminated against white and asian students in favor of blacks.

The Justice Department said it determined that Yale University has discriminated against Asian-American and white applicants, issuing its findings roughly two years after opening an investigation into the school’s admissions practices.

The department said Thursday that it found Yale discriminates based on race and national origin, violating federal civil-rights law, and that race was the “determinative factor” in hundreds of admissions decisions each year. It said for the majority of applicants, Asian-American and white students have one-tenth to one-fourth the likelihood of being admitted as African-American applicants with comparable academic credentials.

“Yale rejects scores of Asian American and white applicants each year based on their race, whom it otherwise would admit,” the Justice Department said. (source)

The famed civil rights icon Martin King, Jr. said in his “I have a dream” speech that he wanted black people to be judged on the “content of their character” and not the color of their skin. The same should be said of their intellectual capacities, or any other ability that they or another group has.

When it comes to any skill there are some things that some people- I speak of men individually here -are good at and others that the same people are not good at. For example, one many might be inclined to book learning, but has difficulty with physical work. Another man might be an excellent physical worker, but has trouble with large books. This does not mean that either man is less human, less worthy of dignity, or less in the eyes of Heaven than the other- it only means they are different men with different abilities.

Yale University has certain standards for admission, and like many Ivy League schools, it is marred by a long history of bribery among very wealthy people whose children are less than models of academic excellence as well as a seldom discussed but understood existence of racial discrimination in that people with low academic standards are given easier admission and many times, partial or full tuition funding on the basis of race, with preference inclining towards black and hispanic students.

Now it should be clear that one does not want to encourage discrimination, and that it is good to help people where patterns of such behavior have existed. That said, it cannot come at the cost of academic integrity. In other words, just because somebody is black does not mean that he merits a lower standard than that required of the white or asian man, and likewise, the same applies to the latter two. There is a standard for all to meet, and it does not matter what the ethnic composition of those who achieve that standard are, but that they achieved the standard.

Would it bother me if a school was all white? No. All asian? No. All black? No. None of these are a problem so long as the standard is being met. This is truly the vision of King’s dream, that people would be judged based on their actions and capabilities and not their skin color.

The famed American black thinker B.T. Washington espoused a similar theory in the late 19th and early 20th centuries, where he said in his famous book “Up From Slavery” that the future of American blacks was by finding what talents best suited one’s capabilities, and then using them to build himself an invaluable place into society at which point people would rely on him and integration would happen naturally. In his experience, Washington believed that blacks would succeed generally in labor positions, so he created schools to help teach bricklaying to advance his philosophy.

While it seems to be unfortunate that many of Washington’s ideas were forgotten by future generations of American blacks, his lesson was not lost on the Hispanic peoples, who (most likely) without knowing his lessons, have followed them to such a point they have been integrated into American society to become a greater social and political force than the blacks are, effectively replacing them.

I don’t say this to encourage any sort of racial animosity. I also am not saying there is one “class” of work or career path suited to one person or racial group. Rather, I am pointing out that it does not really matter what school one goes to, or what race one is, but that the formula for success is a combination of focus, effort, time, and persistence in doing a worthwhile task well, even if it is small. For people who mocked the lettuce-pickers, strawberry-gatherers, factory-laborers, and toilet cleaners that many Hispanics worked as, it was because of their cumulative labor that they have not only earned the respect of most of American society, but also their place at the political table, for the largest bloc after the “white” political bloc is the “hispanic” bloc, and now because of the respect that the two generally have for each other- in particular among the younger generations -they are now mixing naturally.

Was this because of preferred academic admissions, or lowered standards because of racism, real or not? No. It was because of the same advice that Washington gave- do honest work, work well, and do it in a vital area, and you will build yourself into the fabric of society over time, for even if you do not directly benefit from it, in time your children, grandchildren, and beyond will, as this is not a formula that works for any one race, but for all races no matter the time or place in history because it is not about race- it is about principles of success versus principles of ensuring failure.

It is good that the racism in academia is being pointed out, as it needs to be dealt with. However, the greater problem is one of the “this for me, but something else for thee” attitude that has poisoned much of public discourse and relations between people that creates a racism of low standards.

Politics has a place, but all politics proceeds from economic reality. This is a fact of history for all peoples. Likewise, standards exist for a reason in any place, and they are more than race but about capability, and need to be treated as such.

This are the ideas that King and Washington espoused, and that even after so much time, it is unfortunate that they do not seem to have been followed enough.