You are here: Home › The City Of Amsterdam Is Physically Collapsing 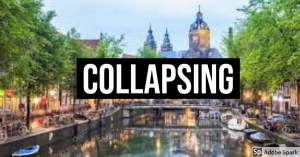 When one discusses the “collapse” of a city, it usually refers to the economics, politics, or culture of that city, and seldom to problems in the physical structure of the city itself. However, this is the case in Amsterdam, the famed Netherlands capitol, which is physically collapsing as CNN reports that the wooden piles and later, concrete blocks which the city has been built on that support bridges and other structures, some of which are half-a-millennium old, are now falling apart and causing a threat to public safety.

Cracks and sinkholes are appearing alongside the waterways of Amsterdam.

Back between the 12th and 16th centuries, when Amsterdam began to grow, buildings were constructed on wooden piles — concrete ones came later — that provided stability in the swampy and unstable land around the Amstel river.

Canals were dug into that same soft soil and canal walls were built.

Given that many of these structures are now more than 500 years old, it’s inevitable that many of them need a check-up once in a while.
But, over the years, it seems the municipality has neglected to keep an eye on some of its most venerable constructions.

Now a significant number of its 1,600 bridges and 200 kilometers of canals need checking and, if necessary, replacing.

While dangers have frequently been highlighted in recent times, it appears that before 2020, Amsterdam’s chief recourse has been to hold its breath and hope for the best.

In January, local news channel AT5 highlighted five years of warnings from officials about the parlous state of the waterways that it said went largely unheeded by city authorities until this year.

It cited the concerns of one diver who had refused to carry out inspections under one of Amsterdam’s elderly bridges because of the fear of imminent collapse.

In response, the municipality said that repairs were being carried out when urgently needed, but although research was being carried out to assess the state of every quay wall and bridge, safety couldn’t entirely be guaranteed.

“Risks cannot be ruled out one hundred percent,” a spokesperson said.

“Restoring the maintenance of the structures to a new level is a complex, large and urgent task.”

Dijksma says that while 20 locations across Amsterdam are currently closed to heavy traffic, more are likely to follow.

“Safety always comes first, but it is a huge puzzle to keep the city accessible and livable,” she adds. (source)

Such problems of urban renewal and decay are common to all societies, and thus are not new. It is interesting, however, this is coming at a time when Europe is having so many problems with her economy, no plan for the future, a lost sense of purpose in the world, and now with the rise of nationalism.

Certainly the city can be rebuild, and it can take a lot of time, but incidents such as these are a reminder that civilization is a fragile thing that can be easily lost or destroyed, or that one fails to care for and only has that one wakes up one day to find out that most of what “supported” one’s lifestyle was being pulled out from under his feet and no one was paying attention otherwise.

Amsterdam is famous for many things, including her infamous “red light” district where prostitutes openly market their “wares” to tourists and anyone who will “buy”. It is also a major center of human trafficking, both of people coming “in” from Eastern Europe, the Middle East, and Africa, as well as of selling people to wealthy buyers or distributing them to other urban areas such as London, Paris, and Berlin.

It is always sad to see major cities go, but perhaps Amsterdam’s collapse is expected, for she has already collapsed morally, and certainly economically and some would say culturally, so what is to prevent a physical collapse at this point?

First It Was Fuel Theft, Now It Is Train Robberies In Mexico
Japan’s Economy Suffers The Worst Hit Ever Amid Claims She Is Done Being ‘Pacifist’ And Wants To Remilitarize
Follow