You are here: Home › Georgia Is Now A Swing State 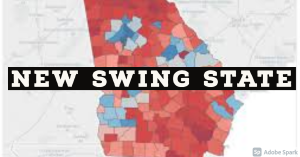 It is said that “demographics is destiny”, and amid changing demographics, BloombergQuint reports that Georgia is now a swing state.

Georgia has been one of the main arenas for the social and cultural struggles that have played out nationally in 2020, with huge street protests demanding police reform and racial justice, the frightening spread of Covid-19, and a fierce debate over reopening schools and businesses. The killings of two Black Georgians, Rayshard Brooks and Ahmaud Ahmaud Arbery, in separate incidents earlier this year sparked outrage, with videos of their death going viral. And the pandemic has twisted itself around state politics, pitting the mayor of Atlanta, Democrat Keisha Lance Bottoms, against Governor Kemp in battles over mask mandates and reopenings. Georgia reported the fourth-highest number of new coronavirus cases in the country in the seven days days that ended on Aug. 24.

“There are all these scenarios out there now that just make Georgia more competitive,” says Jessica Taylor, a Senate analyst at the Cook Political Report, which rates the special election as “Lean Republican” and the other race as a toss-up. There’s “the whole Ahmaud Arbery story, the Rayshard Brooks story, the suburbs that have become so diverse, and Trump,” Taylor says.

“All of these issues have risen in prominence over the last few months for obvious reasons,” says Matt Lieberman, a candidate in the special election and the son of the former Connecticut senator and presidential candidate Joe Lieberman. A Harvard-educated 48-year-old former elementary school principal, he’s a Democrat running on gun control, protecting Roe v. Wade, and cleaning up Washington. “I think there’s going to be record turnout in Georgia this fall,” he says. Lieberman has faced calls to drop out following allegations of a racist character portrayal in a novel he published in 2018. He’s said criticism of the book is political and he won’t withdraw.

The political shift in Georgia is largely limited to cities and their outskirts. In suburban Gwinnett County, Obama lost by almost 28,000 votes in 2012. Six years later, Abrams won Gwinnett by more than 45,000 votes. Cobb, Henry, and other metro Atlanta counties have followed a similar pattern.

Incorporated in 2006, Johns Creek is one of a number of affluent, once overwhelmingly White and conservative municipalities that broke away from the region’s majority-Black counties in the 2000s in the name of local control. The years since have brought an influx of young and professional Asian, Black, and Hispanic residents. A third of the population is now foreign-born, a shift that is even changing the city’s recreation options: In its newest public park, Johns Creek is installing cricket facilities.

Democrats “have been predicting an imminent blue wave since 2014,” says Charles Bullock, a political science professor at the University of Georgia. It hasn’t arrived yet and may not this year, but it eventually will, he says. “It reminds me of 20 to 25 years ago, but in reverse: Back then the Republicans were always saying they were about to take the legislature, year after year,” Bullock says. “And finally they did.” (source)

When I speak of “demographics as destiny”, while this phrase is used often by people who encourage racial animosity, I want to make clear that I do not mean it as such, but rather in the wholeness of the phrase.

No matter where one goes, what the time in history is, a society is made up of people, and it is the philosophy, dispositions, hopes, dreams, self-perception, and actions of the people that make a society what it is, for good or for bad. Likewise, this is why laws change, to reflect the changing tastes of the people, often because the people themselves change in an area. This is something that goes beyond race and class, but is a human issue going back to the most ancient times and is relevant through right now because the nature of man does not change.

What has happened to Georgia is not a case of “brown people taking over”, but one of the ultra-concentration of power into the major urban centers- Atlanta and Savannah, in that order -and then the state being seized control over by them regardless of what people in other parts think. Since urban centers are often divorced from material realities, no matter where one is and especially in the US, they tend to vote for policies inclined as such, and given that the Democrat party has a virtual lock on most cities, politically speaking, it is natural that an overconcentration of power into cities means a shift towards the political left. These changes have been aggravated by migration of white, urban liberals from the north and west coast to Atlanta and Savannah, the transition of power from the Boomers to the Millennials and Zoomers, the decline of religion among the younger generations, and likewise the same embrace of socialism as an ideal in politics. Fertility rates and immigration are at the very best a secondary cause, and probably are more likely a tertiary or lower factor.

Georgia is not alone in this transition. Florida is about complete in her formation as a ‘swing state’, and the same processes are steadily taking place in Texas and North Carolina, and given the current conditions, Tennessee is likely going to become in the next decade a swing state too, and all for the same reasons as listed above. It is a national issue that if one looks carefully, is really the death of the Republican party and the creation of a super-Democrat party.

The Republicans, it should be noted, are also to blame for their own fall, for they are not a “second option”, but just “Democrat-lite” in the way they handle most policies. Ask yourself, what is better- to drink a real “Coca-cola” or some variant of “Coke-lite”? Indeed, if one wants the “real stuff”, as represented by the Democrats, then the Republicans are just a poor choice that is as fake as the Spenda used in diet soda.

I’m not saying the Democrats are good. In fact, they are very bad with a lot of their ideas- but they are honestly bad about them, and in the game of politics, the one who is generally extreme and follows his view to their natural end wins. The Republicans, by choice, have not taken a truly opposing alternative, and they are reaping the fruits of what they have sown as the natural demographic changes just catch up with their actions.