You are here: Home › Quarter Mile Long Food Line In NYC Is A Sign Of The Future 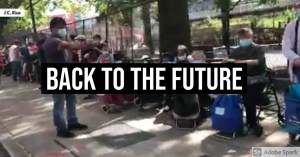 During the Great Depression, food lines, sometimes called ‘bread lines’, were common. Now it is being reported by Zero Hedge that they seem to have returned to New York with a report of a quarter-mile long food line.

Three weeks into a fiscal cliff, a large food bank line emerged on Saturday (Aug. 22) in Queens, a New York City borough, stretching for nearly a quarter-mile down the street.

With each passing day, the failure of Congress and the Trump administration to agree on the next round of stimulus exerts more and more pressure on consumers, who now derive a quarter of all personal income from the government.

The La Jornada food pantry, located on 133-36 Roosevelt Ave, Queens, usually hands out food packages to 1,000 families per week. Now, according to the New York Post, the number, in recent weeks, has skyrocketed to 10,000.

Rodriguez, a volunteer of the food pantry who is executive director, said, “We feel like we are underwater, drowning in a tsunami of people.” He said the surge in hungry families coming to the food bank is “unbelievable.”

The Post interviewed Walter Barrera, who arrived at the food bank at 6:00 ET Saturday to pick up groceries for his family. Barrera, 50, has waited in line every Saturday for food as he lost his construction job during the pandemic. He said there are no jobs available; nevertheless, his teenage sons, 19 and 17, also cannot find jobs.

Barrera said his family is broke, close friends and relatives are helping them pay their $2,300 per month rent in the city:

“What do I tell my children when they look at me with hungry bellies, especially my 11-year-old son?” said Barrera, who is an immigrant from South America, came to the US two decades, in search of the American dream.

Now the dream is dead as the virus-induced recession has crushed millions of low-income folks into financial doom.

“It breaks my heart. I’m their father. I’m supposed to feed them.,” he said.

The Post interviewed others waiting in line, many of whom said they’re jobless and broke.

The reemergence of food bank lines is evidence the fiscal cliff is hitting low-income consumers the hardest, who are no longer receiving stimulus checks, still jobless, and must seek food pantries to feed families. Even though President Trump signed an executive order weeks ago to extend an extra $300-$400 of weekly jobless benefits for tens of millions of Americans, much of that has been delayed as states struggle to fund their portion of the handout. (source)

This is just the start. Because of the nature of society and how it is organized, one should expect to see more of these in the future. Poverty is going to increase, and he who can best care for his needs will fare better than he who cannot raise animals or plant even a small amount of his own food.

Right now there is a current “exodus” from cities, and while some of this is to other less populated areas of the US, this can only endure for so long, as only certain jobs can be done online, and only those with money can pay for land. Generally speaking, as the economy worsens, the trend will be likely towards a greater concentration into cities, as that is where the people are and also will be the greatest chances for work.

Likewise, the trends of automation, robotics, AI, and the continued outsourcing of jobs around the world will just expand poverty in the US.

All depressions eventually end, but for the current time, we are not entering into any great depression, but a Greater Depression than the one of the past, and this is just a sign of what is happening and more of what will come.