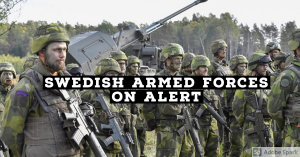 A lot of people mock Sweden for their objectively weird behavior on many social issues. However, Sweden is also a historical imperial power, and a very violent one as well. They are not to be taken as stupid or incapable people, and one should recall that while Sweden was officially a “neutral” party in World War II, there was a tremendous amount of unofficial support of the National Socialists at every level.

Back in January 2018, I noted that the Swedish government has been telling her citizens to prepare for food shortages and conflict in the future. This is most likely related to conflict with Russia, since as I have noted, the next major war involving Russia will likely be fought in the Murmansk region of Russia and towards the North Pole. For this reason, the US and NATO have been conducting frequent military exercises everywhere from the Baltic nation to northeastern Poland to the northernmost regions of Finland, Norway, and Sweden.

Now according to the official website for the Swedish Armed Forces, Forvarsmakten, they are calling on “high readiness” in the Baltic Sea and Gottland in Sweden.

The Swedish Armed Forces is currently conducting a high readiness action in the south-eastern and southern Baltic Sea.Photo: Joel Thurngren/Swedish Armed Forces
These are times of unrest, global security is going through rapid changes and we are witnessing a deteriorated security situation in the vicinity of Sweden.

“There is currently extensive military activity in the Baltic Sea, conducted by Russian as well as Western players, on a scale the likes of which have not been seen since the Cold War”, says Jan Thörnqvist, the Swedish Armed Forces’ Commander of Joint Operations.

To a large extent, the exercise activities are more complex and have arisen more rapidly than before. In addition, the coronavirus pandemic has caused global anxiety and uncertainty. Over all, the situation is more unstable and more difficult to predict. Current developments in Belarus are a reminder.

The focus of the high readiness action is to reinforce naval surveillance in the Baltic Sea, at sea and from the air. The military presence in Gotland is also increased.

“The Armed Forces maintains constant preparedness, around the clock, year-round. Continual assessments are made and activities are adapted to the current situation. Some operations are carried out openly and some are not”, says Jan Thörnqvist.

The Swedish Armed Forces’ assessment is that the risk of a military attack on Sweden is currently low. However, the unpredictable security situation in our neighbouring region places high demands on accessibility and preparedness. The Armed Forces follows, adapts and chooses methods in order to face the situation in the surrounding world. (source)

I am not saying there is any imminent threat of attack or violence. Indeed, in a major war, Sweden would likely side with Germany, officially or not.

What I am noting is that Sweden is very aware of what is happening, and that there are current geopolitical movements taking place that