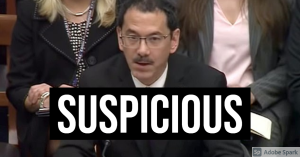 In the world of spies, where cloak-and-dagger abounds, the ways of deceit are the name of the profession, and truth is what is useful in the moment, and nobody knows what is true except that nobody can be trusted.

In an interesting story reported on by the UK Daily Mail, a top-ranking American intelligence officer committed suicide under questionable circumstances.

A high-ranking U.S. intelligence official who died in June killed himself in his own front yard in front of his terrified new wife, it has been revealed.

Anthony Ming Schinella, 52, died on June 14 in Arlington, Virginia, but his death had not been widely reported until this week, when The Intercept revealed a medical examiner’s report listed his cause of death as suicide from a gunshot wound to the head.

Schinella was just weeks away from retirement as National Intelligence Officer for Military Issues following a long CIA career, and had newly married wife Sara Cocoran, a journalist, a few weeks prior to his death.

Corcoran said that she was in her car in the driveway of their home, trying to get away from Schinella, when she witnessed his suicide, according to The Intercept.

The widow did not reveal further details about the events leading up to Schinella’s death.

Corcoran said that after Schinella’s death, she discovered a large collection of bondage and S&M gear that had been hidden in his house.

She also discovered 24 guns and thousands of rounds of ammunition.

Corcoran said that the CIA has completed an investigation into Schinella’s death, but that the agency didn’t provide her with any details.

Schinella was the highest-ranking military affairs analyst in the U.S. intelligence community, and was also a member of the powerful National Intelligence Council.

He was an expert on the Taliban’s military capabilities, and his death came shortly before the New York Times reported on June 26 that Russia paid bounties to the Taliban to kill American soldiers in Afghanistan. (source)

If we take the testimony from his wife as true- which there is no reason at the moment to question -this guy really did kill himself.

But the question is, why did he choose this path?

There are a lot of things that we don’t know. In fact, the story is filled with more holes than a slice of swiss cheese. However, there are a few points to note.

Second, what is the situation with the bondage gear? We really don’t know, since it could be real, or a plant, but it is point of interest.

Third, it is interesting that it happened a week before the Russian expose from the Time was published. Could he have become another Robert Hanssen or Aldrich Ames?

We don’t know. We really know very little, worsened by the fact that one is dealing with intelligence agencies, at which point it often comes to that nobody knows anything anymore because all truths are lies, all lies are truths, and they are so jumbled up they are as or more difficult to separate than who-owns-what derivative in the financial market crash of 2007-2008.

What we can say is, that given the increased open tensions between the US and Russia, something is likely up, and something went wrong, and that is why he died.