You are here: Home › Indian Economy Contracts By 24%, The Worst Yet In Almost Three Decades

By Andrew Bieszad on August 31, 2020 in Featured, General, Highlight 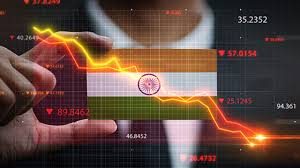 There is no nation in the world has has escaped the ravaging effects of COVID-19. India, a major up-and-coming power, has been gravely affected by the virus, as AP News reports a 24% contraction to her economy, making it the worst in almost three decades.

India’s economy contracted by 23.9% in the April-June quarter, its worst performance in at least 24 years, the government announced Monday, as the coronavirus pandemic ravaged what was once the world’s fastest growing major economy.

The contraction followed tepid 3.1% growth in the previous quarter, which was the worst performance in at least eight years, the National Statistical Office said.

India has been publishing quarterly gross domestic product figures since 1996.

The pandemic has caused economies around the world to contract, but India’s growth had slowed even before the pandemic struck. Many economists believe Prime Minister Narendra Modi’s demonetization of currency in 2016 and a hasty rollout of a goods and services tax inflicted blows to manufacturing.

Hoping to avoid more serious economic damage, Modi’s government in May announced a $266 billion stimulus package, but consumer demand and manufacturing are yet to recover.

Many economists say the distress caused by the contraction could be much worse within the informal sector, the backbone of India’s economy, which was hit far harder than the organized sector during a nationwide coronavirus lockdown during much of the April-June quarter.

There are hopes for a tentative recovery in the next quarter as tens of thousands of migrant workers who returned to their villages after losing jobs during the lockdown slowly return to cities as more workplaces open up. But the picture remains grim for many of the jobless.

About 19 million salaried people have lost their jobs since the 68-day lockdown began in late March, according to the Centre for Monitoring Indian Economy, an independent think tank.

Although many coronavirus restrictions have been gradually lifted, the strain on the economy is expected to continue. Areas most affected by the virus remain under lockdown.

In June, a report by the International Monetary Fund projected an economic contraction of 4.5% for India for the year 2020.

India has reported over 3.6 million cases of coronavirus and over 64,000 deaths. The South Asian country has the third-highest confirmed caseload after the United States and Brazil. (source)

Times change but the nature of man and his responses do not. Just as nationalism has been fueled by anti-immigration politics and economic contraction in Germany, so it will also do the same in India, where instead of migrants the ‘culprits’ are Christians and Muslims, and instead of the German economy, it is the Indian economy.

COVID-19 is bad and has hurt a lot of people, but what is going to be a lot more dangerous are the effects of COVID-19 on how people relate to each other. Historical patterns suggest that economic destabilization caused by pandemics is often a precursor to major wars or other conflicts, and with a global pandemic taking place, as Shoebat.com has warned for a while, it is yet another historical indicator that the world is on the path to war.

Whereas in the past India tended to be spared war, this time she will not be spared. It is likely that she will be fighting against China in the north and Pakistan in the West (from her geographical orientation), and based on the results from the recent skirmish between them, India holds the upper ground.

With tensions rising, the BJP will likely seek to emulate the Trump model as well as the German models for political gain. This likely means more persecutions of Christians and violence against churches.