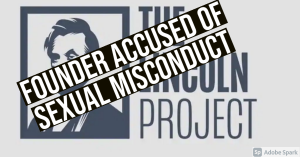 Shoebat.com has relentlessly emphasized that the inclinations towards all things sodom among the Democrat party is not and cannot be understood as a uniquely Democrat ‘thing’, but is also a Republican problem, as many in the very GOP that will criticize sodomite behavior either participate in or when forced to take a stand, will capitulate to it, suggesting that their ‘opposition’ was merely for optics all along. Noting many major ‘conservative’ figures such as Dennia “Fifteen-year-old-boys” Prager’s comments on homosexuality and pederasty only add evidence that the Republicans are just as bad as the Democrats, except that the Democrats are more honest in that at least they are open about their embrace of sodom while the Republicans pretend otherwise.

The Trump administration was no enemy of sodom and openly embraced it, as has most of the GOP. However, knowing that sodomites have very high levels of sexual predation, owing to the fact that the bloc defines itself by its biologically abnormal behavior, the AP reports that the GOP-created Lincoln Project is in shambles after it has been revealed that the founder was sending lewd messages to other young men, including those under age.

The influential anti-Donald Trump group Lincoln Project is denouncing one of its co-founders after multiple reports that over several years he sexually harassed young men looking to break into politics.

The Lincoln Project in a statement on Sunday called co-founder John Weaver, 61, “a predator, a liar, and an abuser” following reports that he repeatedly sent unsolicited and sexually charged messages online to young men, often while suggesting he could help them get work in politics.

“The totality of his deceptions are beyond anything any of us could have imagined and we are absolutely shocked and sickened by it,” the Lincoln Project, the most prominent “Never Trump” Republican super PAC to emerge during the 45th president’s time in the White House, said in its statement.

Days later, Weaver, a strategist who advised the late Republican Sen. John McCain and former Ohio Gov. John Kasich in their unsuccessful runs for the White House, acknowledged in a statement to the web site Axios that he had sent “inappropriate” messages he “viewed as consensual, mutual conversations at the time.”

The statement by Weaver came after several men had taken to social media to accuse him of sending sexually suggestive messages, sometimes coupled with offers of employment or political advancement.

The Lincoln Project made its most substantive comments about the mounting allegations against Weaver after The New York Times reported on Sunday that the paper had interviewed 21 men who said they had been harassed by Weaver.

One of the alleged victims told The Times he started receiving messages from Weaver when he was only 14. The messages became more pointed after he turned 18. (source)

Such Pragerianesque comments should not be a surprise. One may decry “sexual abuse”, but when one mixes unnatural behavior with political legitimacy and elevates it on a national platform, it is only going to produce a disaster. It is a surprise that more of such things are not reported, since it is likely that such takes place.

A trend to watch for will be more of such cases emerging in the future, where predation from the sodomite bloc becomes more common, and yet with the legal protections they demand, attempt to increasingly shield themselves from prosecution of their own actions. People have complained about what happened in the Catholic Church, but the potential scale and effects of this are far worse and more extensive, for the issues never were about religion, but about the behavior of a group based on a moral wrong and which naturally yields its own errors as proof.