You are here: Home › Is Bezos Striving For Divinity With A New Amazon Headquarters That Looks Like The Tower Of Babel? 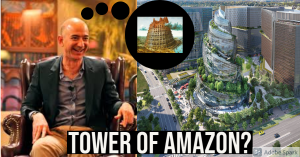 Following the announcement of major online retailer Amazon.com making a corporate move towards Virginia, the company has now released an architectural drawing for her plans of what will become her “second headquarters” and corporate campus. The new building, as the Wall Street Journal reports, is known so far as ‘The Helix’ and include a variety of publicly-accessible and eco-friendly features.

Amazon. com Inc.’s plans for its new northern Virginia headquarters feature an outdoor theme, the latest sign that big tech companies are getting more creative with office space rather than abandoning it.

Phase two of the company’s development in Arlington, Va., calls for three 22-story office buildings and smaller retail buildings surrounded by woodlands, an outdoor amphitheater, a dog run and parking for around 950 bicycles.

The centerpiece will be the site’s fourth and tallest tower, a 350-foot structure dubbed the Helix because it will feature two spiraling outdoor walkways with trees and plants from Virginia that twist to the building’s top.

Amazon, which is unveiling the designs on Tuesday, said the cluster of new office and retail buildings will accommodate around 13,000 employees, with room for more. The project is part of Amazon’s more than $2.5 billion, 25,000-employee office campus, which the Seattle-based company calls its second headquarters. (source)

But something that I have not seen people mention, or discuss, is how this building bears a striking semblance to the tower of Babel. See comparable images below. 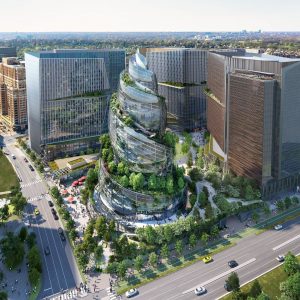 Then, drawings of the tower of Babel: 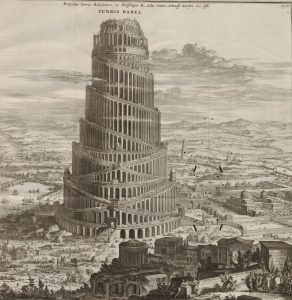 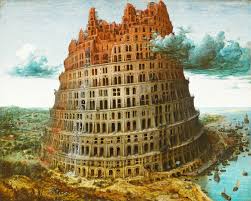 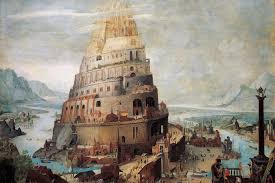 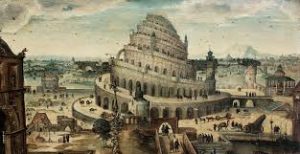 Now before one say that I am simply ‘exaggerating’, I want to refer back to an article I wrote in July 2018 about the coming new darwinism in progress, that you can read here. Skip ahead specifically to the part about the “Long Now” Foundation, of which Jeff Bezos is a part of.

To summarize, the Long Now Foundation is a fundamentally darwinistic, humanistic group that believes in taking an incredibly ‘long’ view into the future, with a perspective that is thousands of years in the view. They overlap themselves with groups and people tied to long-term human cultural preservation, eugenics, and paganism, and all their material suggests an eventual evolution of man on his own powers that will lead to him living as a god with the help of machinery as he travels the extent of the universe. It is similar to Peter Diamandis’ comments about how the human race is currently in the next phase of evolution, from a human being to an ‘interplanetary space being’.

The biggest project of that “Long Now” Foundation is a massive clock they are building which makes one complete revolution every ten-thousand years. As I pointed out in my article, Jeff Bezos is not just funding this project on his own personal land holding in West Texas, but it was not the Long Now Foundation who came to Jeff, but Jeff who approached the Long Now about funding his project, and that the project is constructed with ‘mythic’ intentions in mind.

He confirms twice (27:15) that the clock project is being funded and is taking place on land owned by Jeff Bezos of Amazon.com in Van Horn, TX and that it was Bezos who approached them to support their work (36:35) even after they has purchased a piece of land in Nevada. He also speaks (30:00) about the preservation of human language that is going to accompany the clock and has already been launched into space through the European space agency as part of their language preservation program. Rose speaks of the project as something “mythic” (42:45) to be left behind for coming generations.

The connection between space and the occult has been noted by us at Shoebat.com for a while. For as there is nothing occult about space or the concept of traveling to the stars in itself as they are part of God’s creation, among occult circles the idea of traveling to the stars is synonymous many times with the pursuit of divinity apart from God. Just as the devil claimed that he would ascend to the heights of God but was struck down (Isaiah 14:12), the move to space is seen as a form of evolution (another concept that the occultist A.R. Wallace said was given to him from ‘spirits’ and borrowed in a secularized form by Darwin to form his theory of evolution) of man from humanity to divinity. One can see this in the stories about space travel from Jules Verne and the late 19th century theosophists and science fiction writers dating all through the period to Jack Parsons and the American rocketry projects through the Soviets and even to modern times maintain this emphasis.

In another video in the same article but earlier on, the evolutionist Peter Diamandis lauds Bezos for taking a very strong interest in space exploration and travel (32:20-33:00), saying how a move to space is not just a want, but a ‘must’.

Now, I will not say “Bezos is an occultist” because there is not enough proof to substantiate this. However, we can say that Bezos is:

-Tied to a group that promote eugenics, evolutionism, darwinism, and occult ideas leading to the deification of man
-Approached said group with the intention of building the largest project for them with his own money on his land
-In interested in a topic that is often associated with the occult or pursuit of divinity

We know that Amazon, and Bezos’ policies, allow for the ruthless treatment of their employees, and working for Amazon is a highly darwinistic experince.

Nobody knows what Bezos’s religious beliefs are, and he will not say (source).

We know that Bezos has invested, along with other billionaires in Silicon Valley and the area, into Unity, a company that is working on research to keep people perpetually young, and theoretically forever (source).

We know that “Helix” is a word commonly used in genetics, as in “double helix” for the structure of genes, another curious choice considering the association of Bezos with evolutionist and eugenicist groups, all of which put a prime value not on “racial” purity but “genetic” purity for distinguishing between people.

Having considered all of these points, they together give a different perspective on Bezos’s new corporate headquarters, for while it has a semblance to the Biblical tower of Babel, Bezos’s own associations and actions suggest that the design of the tower is not merely a ‘helix, but his own ‘tower of babel’ representing perhaps a personal quest for earthly divinity.

Could this be what he actually thinks? One can only tell with time. But the warning from the Bible is very clear about the story of Babel, for it is not a model to follow, but one to learn from and avoid, as God will not be mocked, and just as He scattered the workers of the tower, so He scatters any attempts to try and become Him, for God is the Creator, not man. Recalling the words of Psalm 2 (2-6),

The kings of the earth set themselves and the rulers take counsel together against the Lord and his anointed saying, “Let us burst their bonds asunder and cast their cords from us.”

He who sits in the heavens laughs; the Lord has them in derision. Then he will speak to them in his wrath, and terrify them in his fury, saying “I have set my king on Zion, my holy hill.”

Nothing lasts forever. All that a man can take with him when he dies- something that no man can avoid, is his soul and his actions.

Hopefully, for his sake- and all our sakes -he is ready and does not believe that he can outsmart death, for it is one of the only things assured for all men.

The GameStop Uprising And The Spark Of Joker Politics
Massive Increase In 2020 Murder Rate, “Unprecedented” In Recent History
Follow