You are here: Home › We Told You It Was Coming, Israel Now Trying To Get Close With Turkey 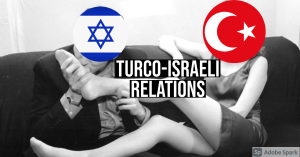 One of the consistent patterns in history that we can see, also before especially in the post-temple destruction survival the global Jewish diaspora, is that while not always doing this, it tends to revolve around appealing to the largest or most powerful person in the room and trying to get as close as possible. If that power starts having problems, there is tendency to leave that power, disassociate or deny any connection with it, condemn it, and then appeal in the same way to the new host. Such behavior also operates outside of morality, so that it is based on selfish motives and also without principle, expressing many of the very things that Christ said were so evil and which He hated and also directly condemned.

Shoebat.com has pointed out that Turkey is rising, with US help, and eventually she may return to being another “Ottoman Empire” in the Middle East. We noted that given the above pattern, there is a strong chance that Israel, which is in fact a very weak nation, may attempt to become Turkey’s new “best friend”. Our suspicious have been noted recently with a series of articles appearing in the Israeli press appealing to Turkey and Azerbaijan, and now, as the Jerusalem Post reports, it appears that our predictions are coming true as Israel is now trying to get close with and rebuild the ‘close relationship’ that she once had with Turkey.

News of rapprochement between Israel and Turkey is heating up after years of ebb and flow in their diplomatic ties.

According to Turkish officials, the once-close allies are eager to kick-start their renewed relations soon.

Both countries expelled their ambassadors in May 2018 over the killing of dozens of Palestinians by Israeli forces along the Gaza border and following Washington’s decision to relocate its embassy to Jerusalem.

In December, Turkish President Recep Tayyip Erdogan said his country would like to have better ties with Israel but Israeli policy toward the Palestinians remained “unacceptable.”

Erdogan champions the Palestinian cause, and has a contentious relationship with Israeli Prime Minister Binyamin Netanyahu.

Erdogan said then that Turkey had some issues with “people at the top level” in Israel, adding that Palestine still constitutes Turkey’s red line and that it was impossible for Ankara to accept Israel’s “merciless” policies regarding the Palestinian territories.

Turkey and Israel, once allies, have had a bitter falling out in recent years. Ankara repeatedly has condemned Israel’s occupation of the West Bank and its treatment of Palestinians.

Dr. Hay Eytan Cohen Yanarocak, an expert on Turkey from the Jerusalem Institute for Strategy and Security (JISS) and the Moshe Dayan Center for Middle Eastern and African Studies (MDC) at Tel Aviv University, says it may be premature to say that things are going to happen soon.

Yanarocak says that despite the “constructive” signals that are coming from both sides, there won’t be any major steps forward until the “crystallization” of the results of next month’s Israeli elections.

A change in leadership in Israel, he adds, may speed up the warming up of ties.

“If Israeli Prime Minister Binyamin Netanyahu will not be able to preserve his seat then, in Turkish eyes, launching a normalization with Israel will be far easier,” Yanarocak said. (source)

Christ said that before He returns, the world will likely have made a return to a state of apostasy. He made this clear when He said “When the Son of Man returns, will He find faith on the Earth?”

This brings us to the interesting case of Israel, and what the Saints have said about her in the end times. Without going into detail (as the matter is a separate issue to bring up), the above noted reason for why Israel is siding with Turkey and historically has sided with German nationalism (including National Socialism), Bolshevism, and other major powers who do great evils or destructive movements is out of a misplaced and arguably parasitic approach to survival by attempting to exploit the most powerful group in the room.

If one looks at it from this way, it is no surprise that a great many of canonized saints have argued that many Jews will champion the devil and the antichrist, because for the simple reason that when it comes, it will be the most powerful entity in the room or world. One can describe this as a literal entity, as a system which an entity controls (such as an empire), or something else, but the fact is that in this case, power is given more consideration than principle. This is also why the Church will be scorned, because She will lose Her power, and this is intentional, for just a Christ, Who is God, gave up His power to be crucified and degraded miserably by His own creation that He might raises man up again and allow man to partake in theosis, so will His bride endure the same, but to be raised up again when He returns for Her.

Now let us be clear, as it is always good to do with the great tendencies to misinformation that exist. It does not mean that all Jews are evil or will follow the devil, for indeed, there will be many who convert and are saved. The same can be said about other races of people too who are in empires or causes that are evil- they too also will convert in great numbers. Indeed, the House of God holds people of every race and tongue in the literal sense, for God discriminates only on the basis of Faith and a desire to love and follow Him sincerely, echoing the words that Christ said, “I have sheep that are not of this fold, and I must bring them also” (John 10:16). However, it does not mean the majority, as has always been the constant teaching of the Church.

I am not saying the end of the world is happening, or trying to draw any parallels for a future prediction. What I am doing is to point out trends and patterns of behavior and show how they factor directly into the words of the saints and Sacred Scripture and Sacred Tradition, and to show the relationship between cause and effect, in this case for Israel and her attempts to build relations with Turkey.

But make no mistake, Turkey is a nation with evil desires. Israel certainly knows this- she is no fool -and yet she is appealing to her on the basis of the same thought processes that have enabled license and power over principle and morality. If she chooses to do this, it may benefit her initially, but as always, one does not play with fire and not eventually get burned, and in doing so, a temporary gain may result is a serious, and perhaps permanently irreversible loss to her.

And as a final note, the US is no different, because she knows the same, and thinks that she can keep the “Turkish menace” on a leash for her benefit. Yet, just like a pitbull owner, one thinks that all is well until one’s pet turns around in an unexpected moment and mauls its owner.