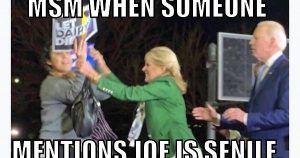 President Biden has already developed a proclivity for gaffes in speaking. However, his most recent Town Hall event in Wisconsin may be his most gaffe-riddled speech ever, for as Twitter snips of video from the event show, Biden managed to make questionable statements about many issues on society and race.

Now, in fairness to Biden, some of the things he said are not objectively wrong or seem to have been done with bad intentions. However, their phraseology is at best questionable or open to a luxury of interpretations, and at worst simply speak for themselves.

BIDEN: “Did you ever five years ago think every second or third ad out of five or six should turn out to be biracial couples?” pic.twitter.com/1jVYuSqQuI

Joe Biden says “bIack on bIack crime” is the primary concern of many minority communities, not police brutality, and then stops himself mid sentence realizing he has just committed the cardinal sin of uttering aloud a hate-fact. #BidenTowhall pic.twitter.com/ixHYdVgolz

So what Biden is pretty much saying is that genocide is a cultural norm !?pic.twitter.com/5lFPo9FN8C

Pres. Biden is asked when he thinks everything can go back to normal:

“By next Christmas, I think we’ll be a different circumstance God willing than we are today.. A year from now, I think there will be significantly fewer people socially distanced, not having to wear a mask.” pic.twitter.com/gUUVQfbyH2

Political fighting aside, and regardless of what one thinks or does not think of Biden, ask yourself, if Trump said ANY of these statements, what would happen?

The answer is obvious. He would be mercilessly, relentlessly, aggressively, ripped apart as the second worst person that has ever lived (Hitler being the first, as he is so often used as a metaphorical personification in a historical figure of absolute evil in post-World War II speech in the US).

I’m not saying this to say “look at Biden” or “look at Trump”, but to point out how the obvious hypocrisy is furthering the polarization already deeply rooted in American society and leading people to violence. When Biden says things that are borderline racist, unbalanced, or could be legitimately interpreted as supporting the genocide of an entire race of people (Uyghurs), and there is a deafening, uniform silence, but Trump so much as says “Gesundheit” after sneezing and the same media is ready to declare that he just hailed Hitler, Stalin, Mussolini, Tojo, and declared his hatred of anybody that doesn’t have a giant hakenkreuz hanging in his living room, something is wrong with the reporting, and all can see it.

Watch these bloopers from Biden, because they are going to get worse since as I have stated before, I have compassion for Biden because I believe, based on what I have seen and strictly my opinion, the man is suffering from age-related medical conditions and is being abused by those around him. The presidency is already a stressful job, and given his age and his health, Biden may not live to see out his full term. Biden should not be in the White House, but with his grandchildren and family. Instead, the poor man is being used as a puppet by people who do not care about it, and it may take his life from him earlier than it normally would have been.

Expect more bloopers to happen, expect more anger from the public, and more silence, and with that, a trend of more polarization that may eventually lead to open conflict on the streets of the nation.

There Was Never A Golden Age Of Christendom. The Entire History Of Christendom Is Warfare Against Satanic Forces That Wish To Destroy Her
Corporations And Police Work Together To Stop Hungry People From Exercising Their Right To Eat Trash
Follow