You are here: Home › Scientists Heard Signals From Extra Terrestrials. Who Could This Be? Demons? Other Creatures From Out Of Space?

By Walid Shoebat on September 4, 2016 in Featured, General

“Are you there, ET?” the message was in response to an extra terrestrial signal.

“A candidate signal for SETI is a welcome sign that our efforts in that direction may one day pay off” writes Paul Glister on August 27th, 2016 while excited about the new discovery.

Recent news of a spike in radio signals that could fit the profile for an intelligent, extraterrestrial source has SETI astronomers across the globe swinging their radio dishes in hopes of confirming the detection.

It was time they debunk Christians who say that no intelligent life exists elsewhere except on planet earth.

Now the long-running search for Extraterrestrial Intelligence, or SETI, projects were ready to refute this.

Now they believe that they have a close call. Heck, they argue, it was a direct call. They heard it.

It was time to prove the falsity that the earth is the only place that the first human couple rebelled against its creator and brought the cosmos under His curse. The Bible is now in question where it says:

“For we know that the whole creation groans and suffers the pains of childbirth together until now.” (Romans 8:22)

With the use of this “whole creation,” the Bible makes no mention whatsoever of aliens from other planets who might be visiting us. Adam represented all creation, and when he fell, creation fell with him. Thus it would have affected Martians, Vulcans, Klingons, Kardashev Type I, Kardashev Type II and any other being in the universe.

The Bible is an old outmoded theory according to alien hunters who are usually evolutionists. This time they are very excited: 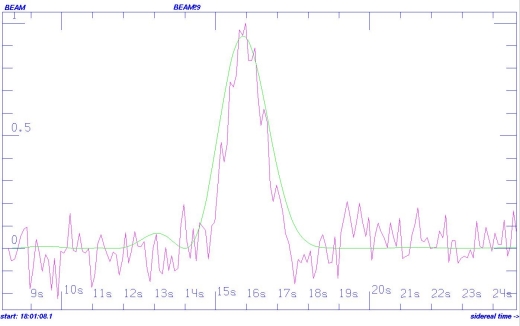 Yet New Science stepped in with some bad news:

“it’s far more likely that the signal isn’t an extraterrestrial beacon at all, but actually earthly interference.”

Radio telescopes have been known to pick up rogue signals – everything from flushing toilets to cell phones.

Rough signals from toilets? Who knows, it could even be the humanoid passing gas prior to the flush. They explained further:

So it was an extra terrestrial gremlin who must have been heating up his frozen burrito.

They complain that the lack of finding Extra Terrestrial is people:

“In SETI part of the problem is that you have a civilisation that is producing signals that can mess you up all the time – and that civilisation is called humanity,” Shostak says.

Perhaps everyone needs to stop going to the bathroom or maybe ban bathrooms and burritos altogether. Perhaps instead of finding extra terrestrial, someone up there needs to evolve an extra testicle to tell them they are simply mad.

Every time I write a theological article I get the ‘science’ type condemning me for believing in “myth” and every time I write an article pertaining to science or medical issues I get no scientist (who believes in evolution) coming here to refute.

Any scientists out there? Anyone with an extra testicle? Hello? ET? Are you out there?

When we ask an evolutionist if Extra Terrestrial exists, they would say ya, likely, since they are not in the Bible. But when we ask them if demons exist, they say “no” since demons are mentioned in the Bible.

If so, who then were Darwin’s schizophrenic contacts talking to?

Darwin’s half-cousin and anthropologist, Francis Galton, who founded an ideology of human engineering called Eugenics and became familiar with Darwin’s work whereby the mechanisms of natural selection was mentally ill and his uncle Charles Darwin was severely mentally ill and Darwin took the theory of evolution from Alfred Russel Wallace who wasn’t just ‘severely mentally ill’, but was a severely troubled spiritist who consulted a Ouija board and communicated with demons:

Wallace returned from Malay Archipelago, with the honor as the co-founder with Darwin. Living in London for three years, he was a successful man in natural history, but a loser of seeking a wife. In 1865, deserted by a “Miss L”, Wallace was very depressed, then his sister Fanny, an active spiritualist, introduced him to this new territory-the field of a “potential science”, and then he was attracted. The first time Wallace attended a séance was on July 22, 1865. As he wrote in his book, he saw the table vibrating and heard a soft tapping sound from somewhere. After approaching these phenomena patiently and “objectively”, he finally concluded that there was an unknown power acting when something strange happened. In September, Wallace visited Mary Marshall’s séance, the most famous one of the day, where he saw a table rise and remain suspend in midair, and a guitar slide itself onto a tabletop. On a Ouija, Marshall spelt out “Para” and “Herbert Edward Wallace”, the name of his younger brother died in Para when they were adventuring in south America. The next time, he put a piece of paper under the table and then took it out. Amazedly, he saw it’s signed with “William”, the name of his another dead brother. Besides, he studied literatures of occult, to know more testimony of the spiritualistic phenomena, and searched for the one with mediumistic power among his friends. In November 1866, there came this one. It was Agnes Nichol, Fanny’s new tenant, who owned the power he was looking for. From then on, he tried to persuade his scientist friends to join séance in his house and witness the psychic phenomenon. In Wallace’s opinion, spiritualists’ explanation is not necessarily exclusive; the most important thing is that the phenomenon itself may have the new laws discovered to science. Unfortunately, most of his Victorian colleagues he missionized gave a negative reaction, except for Chambers, the anonymous author of the Vestiges of the Natural History of Creation (1844), who agreed with Wallace on spiritualism, and believed that it could lead a revolution of thought in the future. Darwin didn’t say anything at first against Wallace’s public heresy, but some colleagues began to criticize him for being a “crank”. Wallace courageously fought for his truth. In 1866, he published a booklet entitled The Scientific Aspect of the Supernatural, which was included later into the book Miracles and Modern Spiritualism, in 1875.

Whoever said that demons do not exist? Is this where all these theories come from? The evolutionist say that we should not exclude the evolutionary theories, since there was a baby in that bathwater.

We counter, that we, the Christians, already threw all these babies (Darwin, Wallace, Galton) out with the bathwater and flushed them down the toilet. Perhaps thats the signal SETI heard. It is either this, or that SETI should announce that Wallace has already discovered the extra terrestrials they are looking for way before SETI appeared. We call them demons, they can call them whatever they want. They do not need astronomers when all they need is an Ouija board (we advise against this).