You are here: Home › CHOP Is About To Get “Chopped” With Calls To Disband The Protest Zone 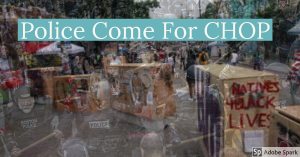 The Capitol Hill Occupied Protest zone has caught the sign of national and international media has not only were such odd demands met and allowed to stay (the permitting of such statements to be made and the actions that followed), but also the fact that there has been a lot of violence coming out of that area including reports of robberies, rapes, and other assaults.

Having noted this, the AP reports that the police are moving to disband the zone, but at an unsure point as to when or how it will look.

Faced with growing pressure to crack down on an “occupied” protest zone following two weekend shootings, Seattle’s mayor said Monday that officials will move to wind down the blocks-long span of city streets taken over two weeks ago that President Donald Trump asserted is run by “anarchists.”

Mayor Jenny Durkan said the violence was distracting from changes sought by thousands of peaceful protesters opposing racial inequity and police brutality. She said at a news conference that the city is working with the community to bring the “Capitol Hill Occupied Protest” zone, or CHOP, to an end and that police soon would move back into a precinct building they had largely abandoned in the area.

The mayor did not give an immediate timeline for clearing out the occupation but said “additional steps” would be examined if people don’t leave voluntarily. With scores of people camping in a park in the protest zone, Durkan said peaceful demonstrations could continue, but nighttime disorder had to stop.

“The cumulative impacts of the gatherings and protests and the nighttime atmosphere and violence has led to increasingly difficult circumstances for our businesses and residents,” Durkan said. “The impacts have increased and the safety has decreased.” (source)

Now it is good this is taking place, and should have happened earlier, but one must ask if this may be a strategy of tension that one is looking at.

Consider how under most circumstances, such an event- the establishment of a veritable “autonomous zone” with a lot of crime and people walking around with ‘armed guards’- would result in a confrontation with SWAT and perhaps more law enforcement.

However, now that it may be shut down, the question is, how will the ‘protesters’ in the area react? Will it be peaceful, or will there be violence? This response is as important, and perhaps more important, than the establishment of the area itself, because if the protesters respond with violence- something they have demonstrated a desire and the capacity for -then it could become a small war zone that either will require or be used as an excuse for possibly employing the military to be used in the area.

Hopefully there will be peace. However, as the general trend is moving towards violence, one should not be surprised if violence does happen, and if the consequence bring about or are used to realize the normalization of a military presence on the streets just as it is in many countries. If this is something that happens, it will be the fulfillment of the words of many who said that the possibility for this to happen in the US was present for a long time unless something was done to stop it, but now too late.