You are here: Home › Welcome The Telescreen As Mississippi Police Seek Access To Live-Stream At Home Security Cameras 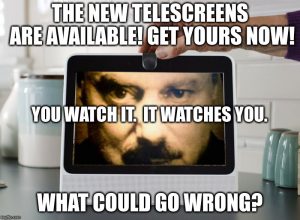 In the dystopic novel 1984, as well as its Russian inspiration “We” by Evgeny Zamyatin, there are screens- the “telescreen” -that broadcasts information all day as well as spies on the public. Nowhere can one go to avoid the telescreen.

Shoebat.com has warned about many trends, including one of them being the formation of conditions that are akin to those in old Germany, Russia, and other nations of the “old world” but with modern technology and more efficiency, warning that if the current moves continue, the same that happened there will be reproduced here, and that from the perspective of history, one will wish for a Hitler, Stalin, or even Mao not because they are good, but because by comparison, their rules will be seen as less brutal an intrusive than what is coming.

That said, a disturbing move towards a brave and dystopic world took place as NBC reports that police in Jackson, Mississippi are seeking legal access to live-stream at home security camera footage, and with it allowing feeds to be directed to police central command so that police could look into the home of anybody who is connected 24-hours-a-day.

Strapped for cash and facing a sharp rise in homicides, city leaders here are expanding police surveillance powers to allow residents and business owners to send live feeds from many types of security cameras — including popular doorbell cameras — directly to the city’s real-time command center.

The new use of this livestreaming technology by police, which is undergoing a final legal review in Jackson, is drawing interest from other small cities that don’t have the resources to build their own surveillance systems. But some have opted out, citing concerns about privacy violations. Civil liberties advocates say those concerns are valid, warning that the technology could lead to increased police scrutiny of people’s everyday activities and more arrests for low-level offenses.

“What you see behind us is an opportunity, an opportunity to better observe and fill in the gaps,” Jackson Mayor Chokwe Lumumba said last month at the ribbon-cutting for the city’s new command center.

The move made Jackson, which has struggled to keep up with advances in high-tech crime-fighting, one of two dozen places in the country where police agencies inked deals this year with Fusus, a small Georgia company that aims to make it easier for American law enforcement agencies to build networks of public and private security cameras.

One of those agencies, the police department in Ocoee, Florida, said it planned to use the home livestream function as part of a deal with Fusus approved last month. Other Fusus clients, including police departments in Minneapolis and Rialto, California, said they are not interested in obtaining real-time footage from doorbell cameras. Several other law enforcement agencies have not responded to requests for documents or questions about their arrangements with Fusus.

The company helps police departments build networks of public and private cameras. The service includes devices — black boxes the size of Wi-Fi routers — that convert footage from just about any kind of camera into a format that can be fed, live or recorded, into a police surveillance hub. Fusus contracts with police departments, which typically sell, subsidize or give the devices to private users. Documents obtained through government records requests show Fusus listing packages from $480 to $1,000 a year per device.

To some Jackson officials, the appeal of more real-time surveillance video is clear.

“What we’ll be able to do is get a location, draw a circle around it and pull up every camera within a certain radius,” Lumumba told the local NBC affiliate in October, after the City Council approved a 45-day trial for the program. “If someone is running out of a building, we can follow and trace them.”

He added, “If someone says, ‘I want my Ring door camera to be used,’ we’ll be able to use it.”

But the idea of police accessing real-time footage from a Ring camera — one of the best-selling brands of doorbell cameras — has thrust Jackson into a national debate over law enforcement’s increasing reliance on private companies to expand their surveillance networks, and the privacy risks that result.

“I don’t believe the government should be tapping into my Ring,” Jackson City Councilman De’Keither Stamps said, questioning whether there were enough safeguards to prevent the technology from being abused. “I don’t believe we should be sponsoring this.” (source)

Remember the “reality” TV show Big Brother? This is Big Brother but in reality, for real.

There is a current trend pushing for “smart homes,” to have all homes hooked up to the Internet and with that all appliances. There is no explanation for this other than a massive power grab, and make no mistake, this is not going to be the same standard for those in government, especially the very wealthy, as it will be for the common man who wants to live a normal life. This is a sick obsession with control seen by every man throughout history who has desired power over the good of his fellow man, and as with all sins, it is a lust for control that can never be satisfied.

While this is a comedy scene from JP Sears, the point is just the same. There is a trend right now of consolidating control over society as has never been before seen in terms of potential damage and scale as well as the ability to see it through to full completion, and it should be of great concern to all, and when one compares this with the current anti-religious trends as well as with the attempts to enforce “thought crimes” for having “wrong ideas”, the potential becomes even deadlier for abuse.

In almost all books about dystopic futures, there is a consistent theme of police enforcing some variant of “precrime”, or arresting people they think are going to commit a crime but who actually do not commit a crime, and the justification is carried out by mass surveillance. This is what we may be witnessing here, in the early stages of development.