You are here: Home › Southern California Has Massive, Unexpected Fire 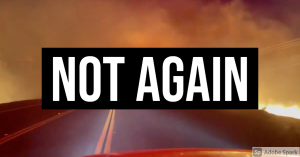 California has a long reputation for horrible fires, and now because of the Santa Ana winds in combination with very dry conditions, Weather.com reports that a fire started in Orange County that is moving fast and could get a lot worse.

Driven by Santa Ana winds, a house fire in California’s Orange County spread to nearby brush and has exploded to more than 6.25 square miles.

The Orange County Fire Authority tweeted that it had received reports that multiple structures may have been damaged from the fire. “We are in the process of verifying the number involved and the extent of damage,” the tweet read.

More than 500 firefighters were battling the fast-moving blaze known as the Bond Fire, the Orange County Fire Authority tweeted.

“We were expecting gusts of up to 70 miles per hour in this area,” Capt. Thanh Nguyen told KCBS. “We’ve seen the wind change also drastically, so that’s what we’re telling all our personnel to be aware of that constantly changing wind.”

All classes, including distance learning, were canceled for at least three schools — Foothill Ranch Elementary, Portola Hills Elementary and Trabuco Elementary, the Saddleback Valley Unified School District announced. The Irvine Unified School District said all of its schools would move to distance learning Thursday because smoke from the fire meant schools could not operate HVAC systems.

Firefighters responded to the fire at about 10:15 p.m. Wednesday PST. By 1:50 a.m. Thursday, the blaze had consumed more than 2 square miles and was threatening other homes, KNBC reported. (source)

California has seen a trend of a mass exodus of people, mostly driven by policy decisions from government where people are overtaxed, overworked, overregulated, and because of that frustrated with their lives and want something better. Washington, Oregon, Idaho, Arizona, Colorado, Utah, Texas, and even states as far away as Tennessee and Georgia have received their share of California residents jumping off of the sinking ship that is the state. This fire, in addition to the other numerous fires that have been happening, may continue to accelerate that trend of population redistribution. However, this “internal migration” also brings another possible consequence, because California did not become a dump because of “Mexicans” coming in, but because of the people living there who chose bad policies consistently, and now by scattering them, one may see an additional trend of increased laws like those in California coming to states where they were not before, thanks to California residents bringing their philosophies that caused their original state to fail with them yet refusing to see the connection between their actions and the consequences that follow.