You are here: Home › Patriot Act Used To Collect Even More Data In 2019 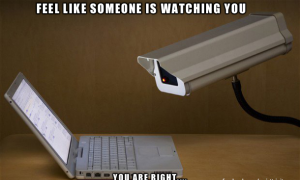 One of the trends that people have noted for years was that of the Patriot Act being a tool to pry more into the personal lives of men for no clear reason other than just monitoring. This has caused a lot of concern for people because it is a step towards implementing a more totalitarian approach, such as by the eventual legalization and promoting of monitoring people anywhere, at any time, for any reason, and possibly making decisions that could impact them legally.

According to TheHill, this trend, which was brought up almost twenty years ago, has not just continued, but matured as it found that the Patriot Act was used as a justification to gather a virtual dragnet of information on people visiting websites in 2019.

The federal government used the Patriot Act to collect website visit logs in 2019, the Office of the Director of National Intelligence revealed in letters made public Thursday, putting a renewed focus on surveillance authorities that lapsed earlier this year.

Director of National Intelligence (DNI) John Ratcliffe, in a Nov. 6 letter in response to Sen. Ron Wyden (D-Ore.), wrote that Section 215 of the Patriot Act, which allows the FBI to covertly obtain court orders to collect any business records relevant to a national security, was not used to get internet search terms.

He later clarified that position in a Nov. 25 follow-up letter after being contacted by the Justice Department to note that the authority had been used once to collect logs showing which computers “in a specified foreign country” had visited “a single, identified U.S. web page” during 2019.

“The DNI’s amended letter raises all kinds of new questions, including whether, in this particular case, the government has taken steps to avoid collecting Americans’ web browsing information,” Wyden said in a statement to The Hill on Thursday.

“More generally, the DNI has provided no guarantee that the government wouldn’t use the Patriot Act to intentionally collect Americans’ web browsing information in the future, which is why Congress must pass the warrant requirement that has already received support from a bipartisan majority in the Senate.”

A spokesperson for the FBI declined to comment on whether the authority had been used to gather similar information before 2019, but did suggest that collecting web browsing data was consistent with the agency’s interpretation of the law.

“Section 215 has been an important tool used by the government to obtain this type of non-content information to combat cyber and other national security threats,” they said, referring to data about communications excluding the communications themselves.

“This type of non-content information can be obtained in a criminal investigation through the use of a grand jury subpoena and we see no reason to prohibit the acquisition of the same type of information under Section 215 when investigating a threat to national security.”

While Ratcliffe noted that the government did not collect keywords for searches, the data collected is considered sensitive by many civil rights groups.

“Our web-browsing records are windows into some of the most sensitive information about our lives — revealing everything from our political views to potential medical conditions,” Patrick Toomey, senior staff attorney with the ACLU’s National Security Project, said in a statement. “The FBI should not be collecting this information without a warrant.”

Sean Vitka, senior policy counsel at the progressive group Demand Progress, said that the same logic could be used to justify mass surveillance.

“If this is legal in their mind then a dragnet on a website is legal,” he told The Hill. (source)

The question here, which the Patriot Act raised years ago, is the same as before.

Likewise, what is being collected about who for what case? These questions are not being answered, and they are serious, because one does not want to collect, assuming good will, things about people who are not involved with the justification of “anything goes” in the name of the law.

This is not about “stopping criminals”, of which the most often cited excuse is child abuse material, but even that is joke because as Reason Magazine and other sources have pointed out, the arguable biggest peddler of abuse material is the government herself. The same can be said about drug cartels as well, for as Shoebat.com and other sites have pointed out, there is a curious overlap between the cartels and what seem to be military or intelligence type programs that many have noted for decades constantly.

Government and people, while there is historical tensions between both, represent important parts of a whole continuum for how a society works. There will always be problems, but ideally there needs to be something of a level of trust between the rulers and the ruled. This trust has been severely undermined for a long time in the US, and it has devolved into more control over things that do not necessarily need control. Rather, things are coming to resemble more of a system found in highly autocratic nations where a small minority controls the majority with little care for them as a whole.

What we may be witnessing, as a trend, is the continued end of the Internet as we know it. Once something that brought a lot of freedom to many, the very tool the made people free can be turned around to enslave them, and if more monitoring continues along with increase enforcement of laws for questionable reasons, such as political ideologies in the name of stopping ‘hatred’ or enforcing a sort of ‘equality’, then truly it is an information gathering trap from which it will be very difficult to escape.

Why Is The DoD Monitoring COVID Vaccines?
Since 2015, 11,500 Christians Have Been Slaughtered By Muslims In Nigeria
Follow