You are here: Home › PA GOP Leader Declares She Won’t Support Trump Because ‘I’d Get My House Bombed Tonight’ 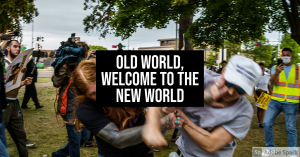 Politics always has been a contentious thing for different peoples throughout history, but sometimes it is more contentious than at other times. The recent fighting between the political ‘left’ and ‘right’ in the US in the last election is a good example of this, and this dislike of other people for political opinions has been reaching dangerous levels, for as Business Insider reports, a leader for the GOP in Pennsylvania has declared that she won’t support Trump because ‘I’d get my house bombed tonight.’

President Donald Trump’s efforts to overturn the results of the 2020 election have reached a fever pitch among the state lawmakers he’s been pressuring, according to the Pennsylvania Senate’s Republican majority leader.

State Sen. Kim Ward, whose district includes much of Westmoreland County just to the east of Pittsburgh, told The New York Times that Trump called her recently.

Beyond Trump pushing her to help put the Keystone State’s 20 electoral votes into his column more than a month after Election Day, Ward said the president’s efforts could be putting her in danger.

Ward’s leadership position is key to Trump’s efforts to overturn the results of the election. She could call on the state’s delegation to make its own picks for the Electoral College so the president could carry the state, which would effectively nullify the will of the people.

The legal precedent for such a maneuver is not on Trump’s side, and most GOP state house leaders in key battleground states have not acquiesced to his demands. Furthermore, time has effectively run out for the Trump campaign since the “safe harbor” deadline for states to certify their election results was on Tuesday.

But Ward pointed to the overall mood among Trump’s base as a more pressing issue.

She told The Times that were she to come out and say she would not sign a letter drafted by Republicans in the lower chamber — which calls for Pennsylvania’s congressional delegation to reject the state’s electoral votes for President-elect Joe Biden — she would face the wrath of Trump’s most fervent supporters.

This right here summarizes, in a major way, trends for the future.

Shoebat.com has been warning that political violence is becoming more commonplace, and that all need to pay attention because it will affect all people. “New World” politics is increasingly taking on an “Old World” style, and this trends is unmistakable and must be watched.

It has always been difficult to get people to hear one’s views, but there are periods where it is easier or harder. Right now, it appears that such is one of those periods that we are entering into for the worse.

The ability to reason with people has seriously declined because people do not want to hear alternative views. In this case, there is nothing that one can do, since the only other option to compelling one to accept another viewpoint is violence.

The political right is taking notice, and in their minds, quite logically speaking, if the left can do violence, why are they not able to do the same, especially if it means protecting themselves?

I am not justifying violence on either side, but pointing out the process of how such things are legitimized and could be in the future.

There have always been people who do violent things, but what matters is the frequency, extremity, and acceptability of the violence at a given historical period, and clearly now things are far worse than what they were ten years ago.

The 2020s is going to be the decade of escalation in all things. Economic, politics, cultural clashes, all things are going to see a great intensification leading up to a major global conflict that will affect all people and none most likely will be spared.

During the 1930s, there was little to argue between the left-and-right factions in Germany, because people did not want to listen, and ultimately, one spouting an opinion would not lead to a greater understanding, but often to violence, After the war, if one lived in the Eastern Bloc, either having had or having the “wrong” opinion at a given time could mean serious trouble later.

This trouble also does not go away.

One can see the political left attacking not just people they do not like but their children, families, friends, and co-workers, but this is what happened in the USSR to individuals who were similarly disliked, simply because of their associations.

This phenomenon was not just for one period in the USSR. It lasted from the rise of Lenin and the persecutions under his acolyte Dzherzhinsky to the very last days as the Berlin Wall crumbled just before the final breakup in 1991.

These conditions are now here in the US and are growing. Likewise, who is to say, as I have noted, they will not appear on the political right as well?

Very bad times are up ahead, and while there will always be a need for people to speak about current issues, it would be wise to draw from the lessons in the well of recent history, especially with the “cancel culture” and “doxxing”, that we are not as far removed from history as it might seem, and the things that happen to others might happen to us.

If it was the US who helped to form the USSR through her funding her actions, as well as National Socialist Germany, should it really be a surprise at some point that one’s ‘chickens’ that one created do not attempt to return home to roost?

The ceasefire breaks as fighting erupts between Azeris and Armenians
Christian Family In North Carolina Puts Up Cross On Their Yard To Celebrate Christmas. Home Owners Association Tells Christian Family: ‘Take Your Cross Down Or Else Pay A Fine.’
Follow