You are here: Home › So Much For MAGA- Trump Appoints Major Anti-230 Lawyer To Deputy Assistant Secretary 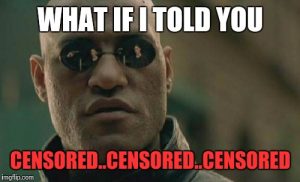 Trump promised to “make America great again.” He clearly failed in this, not because of “the Democrats”, but his own choices that he had complete control over.

One of the areas where Trump failed was in improving the deteriorating conditions inclining the US more toward socialism than ever before. One of those are attacks on section 230. Section 230 says that “No provider or user of an interactive computer service shall be treated as the publisher or speaker of any information provided by another information content provider” (47 USC 230).

What this law means is that online “intermediaries” such as web hosts, we providers, etc. are protected against a host of laws that could be used to potentially hold them legally responsible for what their users say or do. Keep in mind this does not mean that anything is permitted. To the contrary, it allows for people who have differing opinions to express them as independent people apart from being considered a part of the company itself. It is sort of like the “1099” independent contractor form for the IRS, as one contracts to an employer without being an employee of them and therefore legally absolves them of may requirements.

These protected boundaries set up by Section 230 cover basically any online service that publishes third-party content. In spite of many complaints, especially in recent times from the political right, it creates a broad protection that has allowed innovation and free speech online to flourish.

That said, Trump has appointed a major anti-230 lawyer to be Deputy Assistant Secretary.

Candeub has played a central role in carrying out Trump’s executive order targeting social media companies like Twitter and Facebook over allegations they censor conservative viewpoints. The executive order asked federal agencies, including the Federal Communications Commission, to narrow the scope of a crucial set of liability protections that shield online companies from lawsuits over the user content they host. One of Candeub’s advisers at the NTIA, Nathan Simington, was confirmed last week to a five-year term as an FCC commissioner.

Trump has taken increasing aim at the legal shield, a 1996 law known as Section 230, in the twilight of presidency, including vowing to veto a must-pass defense spending bill that overwhelmingly sailed through both the House and Senate because it does not repeal the protections. And he’s rallied his allies across federal agencies and in Congress against the law, which has been widely credited with enabling the creation of today’s thriving online industry.

Candeub, who first joined NTIA earlier this year, has a long history of bashing the social media giants over allegations of an anti-conservative bias. In 2018, Candeub represented a white nationalist in a lawsuit against Twitter alleging the social network censored him.

Candeub has long been critical of Section 230, writing in a 2019 blog post for The American Conservative website that the 1996 law enables “censorship regimes” in Silicon Valley. (source)

Section 230 has its problems, and its provisions are certainly abused. The problem is, as I have often noted, laws that people do not like often are there for a reason, and taking them away seldom fixes problems, but tends to make existing ones far worse

Trump will whine about ‘unfair’ treatment by the media, and there is truth in this. He will do the same for social media. However, at the same time, while there is much real criticism and problems, getting rid of 230 will help no one. In fact, it will likely cause more censorship because while sites such as Facebook will have to be “accountable” for posts made as a “publisher”, it would unleash a flurry of lawsuits that not only could shut down the company, but reduce it to a board just for (non-copyrighted-never-copied only) cat photos and occasional anecdotes provided they are not in the same category as above.

It would immediately destroy “freedom of speech” on the American platforms, as it would make the ‘providers’ legally responsible for what anybody says at any time instead of just the person doing it. It would potentially shut down a majority of Internet forums, video sharing websites, journal websites, and also could hold individual responsible for “copyright infringement” for making something as silly as a meme.

What it would be is tantamount to, if not as an act into itself, starting the fires that burned the Library at Baghdad, but in a modern and technological sense. It would also facilitate the creation of an industry which while already bad, would push for more censorship in the name of ‘copyright’ laws, bringing money now for lawyers but at the long-term loss of the common man and his ability to educate himself on how the world operates and to better his place in life.

Trump has been given many chances. He could have done good, but he has not. I’m not saying Biden is good. One can only tell what he will bring for the 230, as the warnings say he has already promised to revoke 230.

This is the issue I have with Trump. It’s not about Biden. It’s that Trump had the chance to set a good precedent, to stop a lot of this nonsense before it could continue under a Democrat. But he didn’t. Instead, he chose political games and his own ego over the people who asked for him to represent them. He lied, and now the country is likely going to suffer because of it.

FDA Approves Consumption Of First Genetically Modified Pig
2027: The Year When The Nations Will Turn Their Plowshares Into Swords
Follow