You are here: Home › Study: Agnosticism Explodes In The US, Almost Half Of People Are Unsure Of God’s Existence 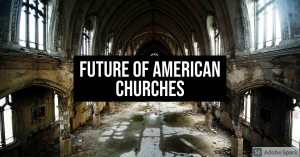 One of the trends that I have pointed out at Shoebat.com is the rise of secularism with a complete lack or indifference to belief in God. America was even at her height a questionably Christian nation, with a long of unbelief. However, this has only become more apparent with time, and with the passing of the Boomer generation, this secularism and lack of belief is becoming more obvious as the Christian Post reports that the most common religious identity among people under 30 is none at over one-third.

The most common religious identity among young adults in the U.S. is “none,” and the majority of Americans don’t believe it’s necessary for a person to believe in God to be moral and have good values, a new survey has found.

Released Tuesday, AEI’s Survey Center on American Life investigating contemporary religion in the U.S. found that among young adults (age 18 to 29), the most common religious identity today is none. More than one in three (34%) young adults are religiously unaffiliated.

Overall, 42% of Americans have a close social connection with someone who is religiously unaffiliated — up from 18% in 2004.

These statistics, the authors say, mark a “remarkable shift in recent years.”

The study also found that Americans are almost equally divided over whether it is better to discuss religious beliefs and ideas with those who do not share the same perspective, and most Americans have never been invited to church. A majority (54%) of Americans say they have not been asked to participate in a religious service in the past 12 months or have never been asked.

These numbers should be expected to continue on a significant decline, to such a point where Christians become a minority among the population. This reflects why certain anti-Christian ideas are common in society, because the Christian philosophy that supports them is not accepted by the people, and as the people make the laws for them, the laws are reflecting the lack of Christianity being practiced among the people.

This is not to say this is good. Is the opposite, and it means that Christians in the US most likely will become less of a source of income for global Christian activity because what resources they have they will need to help themselves since they will be persecuted. One can already see this happening in society, and it is just going to become more common as time passes.

The Boomers are really the last pin holding Christianity as a serious power bloc in the nation together. Once they pass away and the Millennials and Zoomers take full power, it will likely bring in a strongly anti-Christian and pro-anti-Christian period of laws and even treatment.

In the words of the now late Cardinal George,

The Church saw what was happening many years ago, and She has seen everything, especially if one considers that she is the only surviving institution from antiquity, something that is a miracle only from the hand of God as promised in St. Matthew’s gospel.

The trends have been in motion for a while, they are not good, and it is for the wise to be prepared for what comes next, as nothing is going to be easier for Christians.