You are here: Home › Arab Slaves Beg Their Ottoman Overlord Not To Give Them Intestinal Piercings 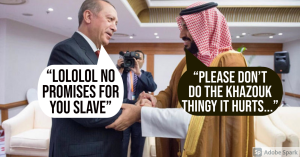 In a recent move reported on by Bloomberg, the leaders of both the United Arab Emirates and Saudi Arabia have reached out to Turkey and President Erdogan, hoping to usher in a new period of trade and partnership.

The United Arab Emirates and Saudi Arabia are holding out the possibility of better ties with Turkey that could benefit trade and security in a volatile region, according to people familiar with the strategy.

The moves are tentative given the backdrop of longstanding tensions and jostling for influence. They are also likely to fall afoul of the Gulf duo’s insistence that Turkey rein in support for the Muslim Brotherhood, the pan-Islamist group they label as terrorist but which Ankara views as a popular movement. But even limited progress could ease frictions over wider regional issues.

The outreach — taking place both publicly and privately — coincides with foreign policy reboots both in the Gulf and Washington. Saudi Arabia and the UAE recently ended a rift with Turkey’s ally Qatar over topics with similarities to their dispute with Ankara.

Turkish President Recep Tayyip Erdogan is also seeking to improve relations with the European Union. And Turkey, the UAE and Saudi all face a U.S. administration under President Joe Biden that is likely to be tougher on all of them. Erdogan’s spokesman Ibrahim Kalin spoke with U.S. national security adviser Jake Sullivan on Tuesday, the first such contact with the Biden team.

Turkey and the UAE have discussed removing barriers to trade, a Turkish official said, adding the overtures encouraged a recent decision to restart flights between the capitals halted by the pandemic.

A person familiar with the Gulf position described the outreach as a process in its early stages. The Brotherhood issue is central to Gulf concerns and to their close ally, Egypt, the person added, speaking on condition of anonymity due to the sensitivities, as did the others familiar with the developments.

Turkish officials say there has been no direct or indirect outreach from Abu Dhabi and Riyadh that included demands for policy change toward the Brotherhood, but are aware that it’s a priority for Gulf states even if there is little room for diplomacy on that. Abu Dhabi and Riyadh view the movement as destabilizing and a threat to dynastic rule. (source)

Now neither the UAE nor Saudi Arabia’s leader are slaves to Turkey in the literal sense. However, historically speaking, the Turks have been the pre-eminent power in the Middle East. They are not “Middle Easterners” in the sense that the Arabs or other peoples are, but are Central Asian migrants who mixed with Greeks and Slavs that created a major world Empire stretching from Morocco to Malaysia. Turkey is powerful and dangerous, and while they have not been an imperial power for almost a century, their history is that of empire and they are a formidable nation to compete with in the world.

Turkey was largely rebuilt by the US and Germany as a part of the Gladio anti-Soviet program, which was very successful. In fact, it was so successful that it turned a secularized and largely regionalized Turkey back into a major military power with the potential to emerge as a world power. In defeating one monster (the USSR), the US and Germany created another, and potentially much more difficult to control one.

The Turks are coming back. They want their empire back, just as the nations of Europe want their empires back. Turkey does not like the House of Saud, or the Arabs in general. As we have pointed out many times on Shoebat.com, Turkey will look with gladness on murdering the entire Saud family, perhaps using a traditional Ottoman punishment such as impalement on a spike, known as a khazouk.

The only reason why Turkey has not invaded the Arabian Peninsula is because of the Americans and their interests. If the US was to pull out, it would give a green light for Turkey to invade. Even in Syria, the US withdrawal from Syrian territories was taken by Turkey- with the full knowledge of the US -for Turkey to send her own troops in.

The House of Saud knows they are living on borrowed time. They want their power, and they know what Turkey wants. This action noted in the story above is not done out of love, but fear, because they know what Turkey is doing, what she is capable of, how they were under Turkish dominion for centuries, and knowing they might become vassals again, they are trying to ‘head Turkey off’ so the families can save themselves. They will be forced to serve under the Ottoman banner, but it is better than being a human popsicle in the desert for the birds to feast on.

Thus, these national leaders are in a sense little more than slavish vassals to greater powers. If the US goes, the question is, will the new Ottoman overlords be so generous to them as to not give them intestinal piercings?

That remains to be seen.