You are here: Home › Romney Moves To Outdo The Democrats With Stimulus Checks 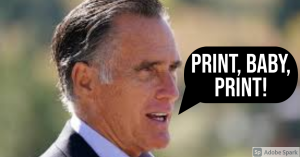 As I said many times, money printing, once began in mass, cannot stop for political reasons. If it was to stop, it would crush what is left of the US economic machine. Therefore, unless one wans to accept blame for a major, deflationary depression, the popular (and in a sense, popu-list answer) is to print money until the currency fails and problems can be blamed on another.

Trump did the biggest money printing in history with two stimulus checks in 2020 for COVID relief. Now Biden is planning to follow in Trump’s steps with another COVI package, and Democrats are now discussing a UBI or other type of system for the future based on family size, as I have noted. However, it looks like it will not be Democrats, but the Republican Mitt Romney who is making even bolder steps than the Democrats with plans to provide handouts to families numbering from $3,000 to $4,200 per child, depending on the age of the child as the Washington Post reports.

The emergence of Romney’s child benefits plan as Democrats prepare a similar effort could give the White House an opportunity to incorporate policies with bipartisan support into its relief package. Romney has said Biden’s stimulus proposal is too expensive, meaning he may vote against the broader plan even if it includes much of his new child benefits proposal.

Romney’s new plan, like the one being explored by senior Democrats, would provide the benefit monthly by depositing it directly in taxpayer bank accounts. Advocates for expanding child benefits say they will make an enormous dent in child poverty in the United States, although some conservative scholars argue the benefits may discourage parents from pursuing employment. The extent of GOP support for Romney’s proposal is unclear.

Unlike Democrats’ plan, Romney’s Family Security Act would be paid for, in part, by eliminating Temporary Assistance for Needy Families, a welfare program, as well as other existing federal tax credits for children and working families. Many Democrats are likely to oppose this part of Romney’s plan. (source)

For now, until the currency itself devalues- what some call “inflation” using the ever-changing definition of the government -this is going to be the trend for the future. Money printing, based on “Modern Monetary Theory” (MMT) presumes that “debts don’t matter”, yet they always do, because if one cannot pay one’s bills, one cannot continue to function. It is, perhaps, a clever academically-couched way to rephrase the concept of printing money until it becomes worth the paper that it is printed on.

One day, the checks will stop- they will have to because the system itself will become unsustainable. However, the trend for now is going to be to print continually until one cannot print any longer.

Get the presses ready and buy some ink, because the checks are going to flow.