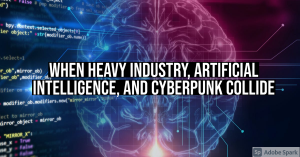 One of the trends I discussed recently was what seems to be the merging of the technology sector with the industrial sector. In the past it was the “military-industrial” complex, but this term, dated and relevant at the same time it is, not just adds data as a separate bloc into itself, but shows increasingly that it is all becoming one, seamless, giant machine with little distinction between parts. I noted this taking place in the auto industry, with the integration of computers with transportation to be a major trend that not just will but truckers out of business, but will also seriously force this trend above of merging between the different groups to become more pronounced.

Now the Wall Street Journal is reporting on this, saying that the Ford Motor Company is taking an even stronger interest in technology, and thus while it is and remains a car company (defined by heavy industry), it is redefining itself as a technology company by the further ‘computerization’ of their vehicles.

Ford is embracing digital technology, and talking about it loudly, in an effort to catch up with both Tesla and General Motors. The new approach is boosting the stock, but rising expectations don’t come for free.

The big news in Ford’s fourth-quarter results, reported after the bell Thursday, was a massive acceleration in technology investments. Just over four months into the job, Chief Executive Officer Jim Farley pledged $22 billion through 2025 to electric vehicles and the digital technology involved in connecting them to the internet, as well as $7 billion to autonomous driving. This was after the company on Monday inked a far-reaching partnership with Google also centered on “connected” vehicles and the reams of data they will produce.

Mr. Farley promised more detail in the spring, but hinted that the company might invest in battery production, as GM has done through a partnership with South Korea’s LG Chem. The car industry is currently struggling to produce as many vehicles as it would like because of a global shortage of semiconductors; Ford “cannot afford” to face the same problems with batteries, Mr. Farley told analysts. (source)

Eventually, it would not become a surprise if this pattern continues so that like many other corporate conglomerates, all formed one, seamless, giant entity through which all or most data is filtered and processed, and due to its presence, has the effective ability to lock people out of society.

For those who expressed concerns about a “Chinese social credit” type system coming to the US, this is most likely the form which it would take, at least in a Western context. Wired has been talking about this, noting how Chinese-like “fusion centers” for data gathering and tracking are appearing all over the US in major cities, and how in spite of the fact that they operate no differently than do those in China, they are here and becoming a larger part of American life.

What China is accused of, the US is also guilty of, but it is simply placed into a different framework to make it socially acceptable. However, this does not change the end effect, which is that “good” people are promoted, and thus enforce a status quo, but the “bad” people, who sometimes are really questionable people but often include simple social misfits or even those who express a mere disagreement with the state of the current system, are “punished” by being locked out and economically starved of any social sustenance.

It is interesting to see that the future, while many speak of it being very exciting, certainly is, if one considers it from a sort of cyberpunk view, because the combination of unspoken chaos and anarchism and fighting alongside a strict and growing form of authoritarianism limited not just to governments is something right out of a science fiction novel, except now, science fiction is becoming contemporary reality.

Report: COVID Spread Won’t End Until About 2027
The Beginning Of Anti-Clerical Violence And The Gradual Death Of Christendom
Follow