You are here: Home › Report: COVID Spread Won’t End Until About 2027 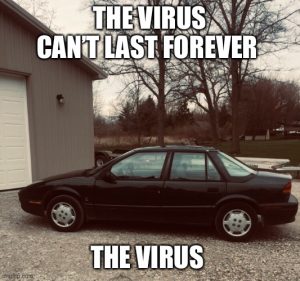 The COVID pandemic that began in 2019 has been causing economic chaos around the world, and it is not getting better. Without speculating or discussing the details of the pandemic, the fact is that as long as ‘preventative’ measures against the pandemic remain in effect that call for massive economic restrictions, it is going to have a significantly negative effect on economic life.

As the Financial Post reports, citing new sources, authorities are saying that one should expect the current pandemic to endure for about seven more years.

When will the pandemic end? It’s the question hanging over just about everything since COVID-19 took over the world last year. The answer can be measured in vaccinations.

Bloomberg has built the biggest database of COVID-19 shots given around the world, with more than 119 million doses administered worldwide. U.S. science officials such as Anthony Fauci have suggested it will take 70 per cent to 85 per cent coverage of the population for things to return to normal. Bloomberg’s Vaccine Tracker shows that some countries are making far more rapid progress than others, using 75 per cent coverage with a two-dose vaccine as a target.

Israel, the country with the highest vaccination rate in the world, is headed for 75 per cent coverage in just two months. The U.S. will get there just in time to ring in the 2022 New Year (though North Dakota could get there six months sooner than Texas). With vaccinations happening more rapidly in richer Western countries than the rest of the globe, it will take the world as a whole seven years at the current pace. (source)

What an interesting number, especially as Ted has aptly pointed out that based on his research into government reports and military documents shows major increases in militarism up through 2027 specifically labeled.

It is also interesting, since as Shoebat.com has noted, in the words of Niklas Frank, that if Germany was to have severe economic problems, which they are as a result of COVID, that endured for five to ten years, that Germany could return to her imperial ways as before World Wars I and II.

This COVID pandemic is about a lot more than just illness. This is a gateway to a world war, as pandemics many times precede major global conflicts, and we are living history right now in the leadup to it, if patterns remain the same.

Hopefully, a war will not happen. However, all of the patterns, from a historical perspective, speak to this.

Don’t be caught off guard.