You are here: Home › Open Your Wallets, The BidenBux And KamalaKash Are Coming As Way For A Third Stimulus Check Is Cleared 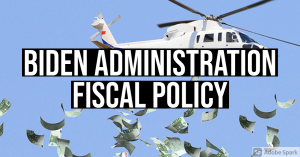 Last year, I talked about the danger of the “Trump Stack”, or the COVID stimulus checks that Trump signed into law and that as I warned, likely

he U.S. Senate early Friday morning approved a budget resolution that will allow passage of President Joe Biden’s coronavirus stimulus bill and also agreed that it would restrict high-income taxpayers from claiming the $1,400 direct payments.

Lawmakers worked through the night on a bevy of amendments to the resolution, which will trigger a procedure known as reconciliation and Democrats to pass a $1.9 trillion package by majority vote without the threat of a filibuster. The final vote was cast just after 5:30 a.m.

The resolution passed, 51-50, with every Senate Republican opposing it and Vice President Kamala Harris casting the tie-breaking vote.

Even so, adopting several amendments proposed or co-sponsored by Republicans allowed Senate Democrats to claim that the stimulus package had support on both sides of the aisle.

“Many bipartisan amendments were adopted, so this was a bipartisan activity,” Senate Majority Leader Chuck Schumer, D-N.Y., said after the final vote. “But we cannot underscore enough how much help America needs during this awful crisis, and we cannot miss the point that we still have a long way to go.”

On one bipartisan proposal, senators voted, 99-1, in favor of a provision that could exclude wealthier households from any payments. U.S. Sen. Rand Paul, R-Ky., cast the only no vote. (source)

I keep writing about this, and it is for a good reason.

This check, these payments, they CANNOT be spoken about enough because this is how a currency- any currency- eventually dies.

It is a simple, fundamental, economic fact that one cannot print one’s way to prosperity. It does not work, and yet this is the basis of “Modern Monetary Theory” (MMT).

The US is running head-first for disaster, and it is not an accident that the COVID pandemic keeps seeing further restrictions on economic activity, or that there is a global push for militarism. All these things are trends running alongside each other, since they all lock into and support the other.

And, as I have said before, the money printing will not stop because it cannot, for if it were to stop, it would force a debt reckoning, and that cannot be allowed since it would push the US off of her position as the economic ‘king of the global hill’, and not to mention cause massive impoverishment and social unrest. Instead, the answer is going to be to print the currency until it fails, blame the problems on somebody else, and very likely, start a war to ‘restart’ the economy.

If you get money from this ‘program’, it would be advisable to use it to prepare for the future, since if people believe that things are difficult right now, they have yet to experience what they will likely become over the next decade, because no amount of printing, spin doctoring, or manipulation can hide the economic realities taking place now.