You are here: Home › Nevada Moves To Allow Tech Companies To Function As Their Own Governments 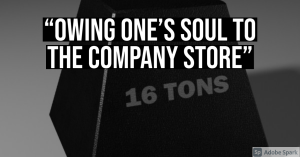 With increasing regulation either in practice or looming for the common man from many governments, questions about the nature of freedom and the relationship of the rulers to the ruled of society abound. However, now adding to that debate is a new move from the state of Nevada, which wants to modify laws to create legal areas were tech companies for all purposes can create their own governments.

The zones would permit companies with large areas of land to form governments carrying the same authority as counties, including the ability to impose taxes, form school districts and courts and provide government services.

The measure to further economic development with the “alternative form of local government” has not yet been introduced in the Legislature.

Sisolak pitched the concept in his State of the State address delivered Jan. 19. The plan would bring in new businesses at the forefront of “groundbreaking technologies” without the use of tax abatements or other publicly funded incentive packages that previously helped Nevada attract companies like Tesla Inc.

Sisolak named Blockchains, LLC as a company that had committed to developing a “smart city” in an area east of Reno after the legislation has passed.

The draft proposal said the traditional local government model is “inadequate alone” to provide the resources to make Nevada a leader in attracting and retaining businesses and fostering economic development in emerging technologies and industries.

The Governor’s Office of Economic Development would oversee applications for the zones, which would be limited to companies working in specific business areas including blockchain, autonomous technology, the Internet of Things, robotics, artificial intelligence, wireless, biometrics and renewable resource technology.

Zone requirements would include applicants owning at least 78 square miles (202 square kilometers) of undeveloped, uninhabited land within a single county but separate from any city, town or tax increment area. Companies would have at least $250 million and plans to invest an additional $1 billion in their zones over 10 years. (source)

This is an interesting, and also a very cyberpunkish move from the state.

In cyberpunk, one combines a nihilistic view of the world where religion is seldom found, combined with an oppressive government alongside rampant anarchy. In other words, think of a world similar to Philip Dick’s “Do Androids Dream Of Electric Sheep?”, memorialized in popular culture by the film Blade Runner. It is a world of the future, and from what we can see, a future that is not too far away from the rest of the human race.

If an ISP has jurisdiction to act as a government, many legal questions open up. For example, if one is accused of a “crime”, who prosecutes it? The company? Or the state? This is just one of many very controversial and questionable possibilities. Also, what happens to “fugitives”? What does say about the state of law, and who has power over who in society? What about taxes, and their collection?

I have been writing lately about a trend I see- of which I believe this above story may be a part -of the merging of the military-industrial-tech complex into one, massive, seamless entity made of different layers but that becomes a ‘machine’ through which all of society is ‘filtered’ and acts as a sort of control device on what people can say or not say, or even participate in society. It is essentially the Chinese social credit system, but more complex and insidious- the “iron fist in a velvet glove” approach, as opposed to the open brutality of the CCP.

How this will affect the relationship between the citizen and all aspects of government is yet to be seen. Nevertheess, the trend that it represents, of continual expansion of power to the crushing detriment of the common man in all ways and to his spirit, is likely to continue to grow and emerge as a serious trend well after the COVID pandemic passes, because it looks like the ‘company town’ may be back, and if one remembers how that worked out in West Virginia and Kentucky with the coal miner abuses, it is likely to go nowhere good.

Open Your Wallets, The BidenBux And KamalaKash Are Coming As Way For A Third Stimulus Check Is Cleared
Man-Machine Merger Continues As Human Brain Cells Are Interwoven With Microchips
Follow